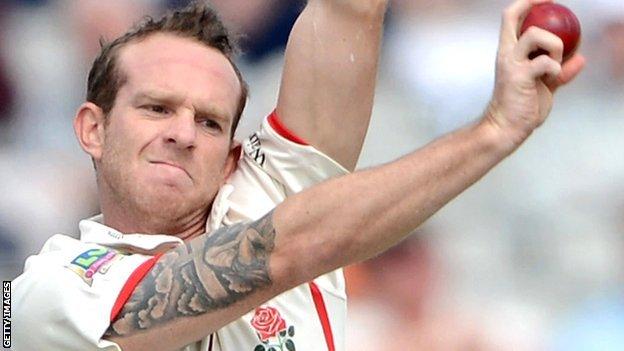 Procter (5-17) was Durham's main tormentor as only four players reached double figures in their 102 all out, Paul Collingwood top scoring with 25.

Durham, who are bottom of the Division One table and without a win all season, soon found themsleves in trouble on 34-4 after being put into bat.

Opening bowlers captain Glenn Chapple (2-32) and Kyle Hogg (3-23) started the ball rolling for last year's champions, who are also waiting for their first win this campaign.

Hogg took the wickets of Will Smith, Gordon Muchall and Ben Stokes in the space of five balls. Smith is Durham's leading scorer this season with 230 runs and the only player to score a century.

The hosts have now failed to pass 200 in six of their 10 completed innings this season and lost their last six wickets for 24 runs.

After a three-hour rain delay, Lancashire were soon in trouble themselves after a four-wicket burst from Onions.

Procter slightly steadied the ship with a patient one-hour 18, but lost his wicket to Stokes, while Horton, who took 73 balls to score his first boundary, was unbeaten at the end as Lancashire edged ahead.

"The two teams struggled with the bat in humid conditions and it was a recipe for disaster here in Chester-le-Street.

"Durham were all out for 102 and Lancashire doing not much better.

"Horton was then dropped on 11. The lead already looks like an ominous one given the fact 18 wickets fell on day one."

"A crazy first day at the Riverside and I'm not sure where to start or end with this one.

"I must say a brilliant spell of bowling from Luke Proctor, taking career best figures 5-17, is a clear standout for Lancashire and on a personal level he's a had good season so far.

"But then Graham Onions fancied getting involved in the action as he bowled Durham back into the game.

"Under the circumstances it's remarkable that Paul Horton could actually carry his bat for Lancashire and if he did the Red Rose could build a handy first innings lead.

"It currently stands at 39 and on the evidence of whats happened today that could prove crucial."