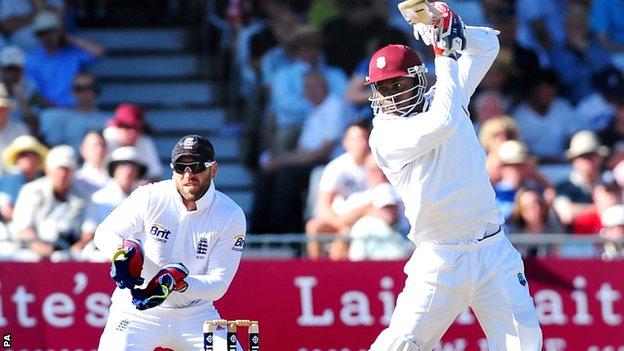 A battling unbeaten 107 from Marlon Samuels and bristling 88 not out from Darren Sammy dragged West Indies back into the game after England's pacemen had taken early control on day one of the second Test.

Two wickets apiece from Stuart Broad and James Anderson reduced the tourists to 63-4 after they won the toss and decided to bat on a pitch near-perfect for long innings.

But an unbroken stand of 168 between Samuels and his captain, after the usual stout resistance from Shivnarine Chanderpaul, first steadied a listing ship and then seriously frustrated England.

At the close West Indies had reached the comparative calm of 304-6, Samuels's third Test century - and his highest Test score - coming just before the close with a flick off the hip for four and celebrated with enormous satisfaction.

It was the highest seventh-wicket partnership by any team at Trent Bridge and as impressive as it had earlier seemed unlikely.

In conditions more familiar with the Caribbean than Nottingham, Sammy had no hesitation in opting to bat having won the toss.

With not a cloud in the sky from Scotland to Seville, there appeared to be little danger of the prodigious swing for which Trent Bridge is famed, while the pitch - hard, well-paced, true - looked a belter to bat on.

"Caribbean cricket supporters and all of us who want to see West Indian cricket flourish will be delighted that Darren Sammy has got his highest Test score. It will do his credibility good as captain and his confidence good too."

England's attack had other ideas. Broad found bounce from the Radcliffe Road end, Adrian Barath poked and Anderson took a stunning one-handed reflex catch to his left at third slip.

A moment later Anderson was left screaming in frustration when Tim Bresnan could not hang on to another sharp chance through the same area from the edge of Kirk Edwards's bat.

It was the briefest of reprieves. England's new player of the year produced a ball which cut in sharply off the seam, and Edwards's wide open gate did the rest.

With barely half an hour gone and only 26 on the board, Kieran Powell gave a better indication of batting conditions with a sequence of sweetly timed drives through cover and midwicket.

But Anderson had Darren Bravo caught at second slip by Graeme Swann from another pinpoint leg-cutter before taking another good catch at the other end to give Broad Powell's scalp for a brisk 33.

At Lord's a week ago Chanderpaul and Samuels had stood almost alone against England's bowlers, and for a sterile period around lunch they seemed ready to repeat the rearguard.

Despite a brace of half-chances off the edge, the pair extended their partnership to 62 at an almost imperceptible rate until Swann, to the delight of his home crowd, struck the key blow.

Chanderpaul was fooled in the flight by one that turned past his defensive prod and hit him on his back leg.

While umpire Asad Rauf initially turned the appeal down, the referral indicated the ball was hitting off stump an inch from the top. The West Indies cornerstone was gone for 46 and Swann celebrated wildly.

Denesh Ramdin soon followed, bowled with feet motionless by a full, fast one from Bresnan, to leave his side 136-6 and in deep trouble.

Anderson and Broad peppered Samuels and Sammy with a succession of short balls but the unheralded duo gradually found their shots as the old ball lost its shape and zip.

Samuels went to his half-century with a dismissive punch through the off side and began to accelerate, unperturbed by his side's precarious position and ably supported by his skipper.

"Whether Marlon Samuels has turned a corner in his journey as a Test player is perhaps too bold a claim to make. But he has shown his more callow team-mates at the top of the order what can be done with technique and concentration."

Sammy drove Bresnan back down the ground with elbow high for the most aesthetic boundary of the day, and as the total passed 200 and the shadows began to lengthen after tea England looked, for the first time, a little impotent.

Bresnan in particular was below his best, going for 1-82 from 21 overs as runs began to flow at increasing pace in the final session.

Both batsmen were able to work singles and crunch away the bad delivery, and when the new ball was taken an hour before the close it failed to seriously disturb their rhythm.

West Indies have never lost a Test at Trent Bridge. In eight previous matches they have won four and drawn four. England have won their last three Tests at the ground, all by huge margins.

Something will have to give. The smart money remains on it being West Indies, but the earlier certainty has now gone.