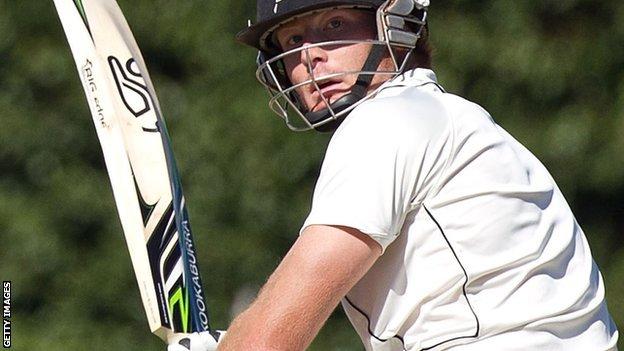 Division Two leaders Derbyshire strengthened their position at the top of the table by completing a 10-wicket win over Essex at Chelmsford.

Martin Guptill blasted 66 not out off 52 balls as Derbyshire reached their target of 94 in 18 overs.

It was their first win in 18 games at Chelmsford, a run stretching back to 1937.

Essex were soon in trouble when David Wainwright had Mark Pettini caught by Wes Durston at slip before bowling Ben Foakes' middle stump in successive overs.

Shah looked secure but was bowled by Durston's off-spin when he missed a long-hop, and although Foster tried to keep Essex afloat he ran out of partners and was last out, pinned leg before by Tony Palladino.

Guptill eased any Derbyshire nerves by twice driving Charl Willoughby for six, although it was opening partner Paul Borrington who took the visitors to their target with two fours in an over off Greg Smith.

"Problems are mounting for Essex after this huge defeat inside three days.

"They couldn't recover the ground lost after being shot out for a massively sub-par 182 in their first innings.

"The key issues are a lack of even one in-form specialist opener and the suspicion that the seam attack once again looks to be over-reliant on David Masters.

"There's no lack of competition for places and plenty of young talent in the middle order but centuries are needed.

"Derbyshire are moving in to unchartered territory and the rest of the division will be taking notice now.

"The formula of big runs from the top order and a high-quality left-arm spinner looks to be working. They must not make Northamptonshire's mistake last season of losing all momentum during the T20 campaign."