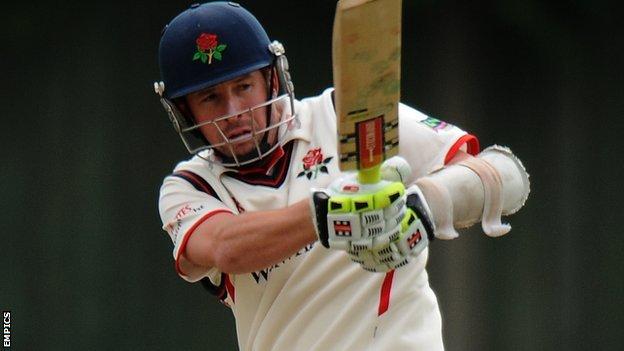 Middlesex will have to bat throughout the final day to deny Lancashire their first Championship victory of 2012.

The visitors resumed on 155-5 but were bowled out for 230 before Lancashire scored quickly and declared on 266-8 to set Middlesex a winning target of 429.

Lancashire, the 2011 champions, have drawn three and lost three of their first six Championship matches of the season and need to take 10 wickets on Saturday for their first win of the campaign, while Middlesex need another 400 runs for victory.

Horton saved Lancashire from defeat last week when he scored an unbeaten 137 and batted throughout the final day against Warwickshire but has now put his side in a strong position.

His rapid 89 came off 114 balls as the hosts scored at a rate of almost five runs per over.

Earlier in the day, Ajmal Shahzad took 4-40 to claim his best bowling figures since joining Lancashire on loan from Yorkshire.

Malan became the first Middlesex bowler this season to take a five-wicket haul as he dismissed Horton, Brown, Ashwell Prince, Croft and Shahzad.

"This game is set up beautifully for the final day and it's the exact opposite of where Lancashire found themselves last weekend.

"At Edgbaston against Warwickshire they needed to bat out the final day to secure a draw, which they did superbly.

"Now the boot is on the other foot. From trying to save a game last weekend to trying to win one this weekend, to claim their first win of the season.

"It seemed Lancashire were able to get a little more out of the pitch than Middlesex managed and they'll be hoping that continues into the final day.

"It certainly won't be easy and plenty could rest on whether Simon Kerrigan can find any spin on a the final day pitch as he and Lancashire try and bowl themselves back to winning ways."

"Middlesex face a mammoth task, on a turning pitch, to save the game on the final day.

"Chris Rogers and Sam Robson faced a tricky 14 overs to survive on the third evening - but even with all their wickets standing it will be an admirable effort to avoid defeat let alone win the game.

"Timing has become easier on the track since the first morning as the sun has baked what was a slow wicket.

"However, Simon Kerrigan will be the key man for Lancashire as they look to secure a victory even against a long Middlesex batting line-up, which has something to prove after being rolled cheaply in their first knock."