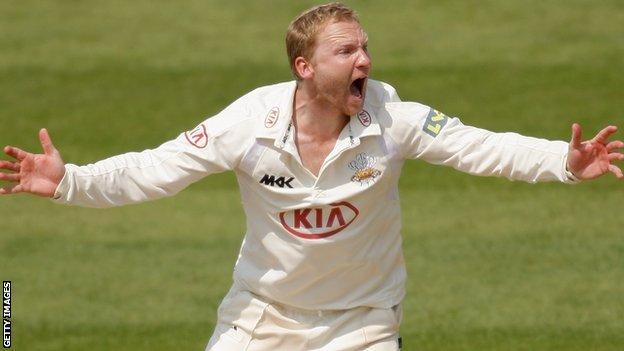 Former England off-spinner Gareth Batty produced figures of 6-73 to put Surrey back in the match on day two against leaders Warwickshire.

It was the 18th time he had taken five wickets or more in an innings and led to the visitors being bowled out for 247, a first-innings lead of just 24.

Varun Chopra top-scored with a patient 78, a very different innings to that of Jason Roy as Surrey began their reply.

Roy's innings lasted only 86 balls, but in the overall context of the match, the home side must have been disappointed to see him fall to Rikki Clarke, with Darren Maddy, the straighter of two men positioned at short mid-wicket, taking the catch.

And having earlier lost Steven Davies and Zander de Bruyn, they could ill afford to lose skipper Rory Hamilton-Brown, who was caught behind trying to square cut a ball from Warwickshire spinner Jeetan Patel at the start of the next over.

His dismissal left Surrey on 108-4 - just 84 runs ahead - but Jacques Rudolph and Tom Maynard came together to steady the ship and protect their side's lengthy tail.

Maynard struck a boundary off Patel in the day's final over as he moved on to 21 not out, with partner Rudolph on 17, as they survived the final 13 overs.

"This wasn't one of Warwickshire's better days of the season so far, but they could still win the game.

"The pitch has been taking a bit of turn as Gareth Batty's haul of wickets suggest, but it still looks a fair batting track, if a little slow, and if any player can score the first century of the game on Friday, it'll probably win the match for his team.

"Whatever happens it's been another absorbing Championship contest and the presence of thousands of schoolchildren, seemingly enjoying themselves, added colour and atmosphere to the second day."