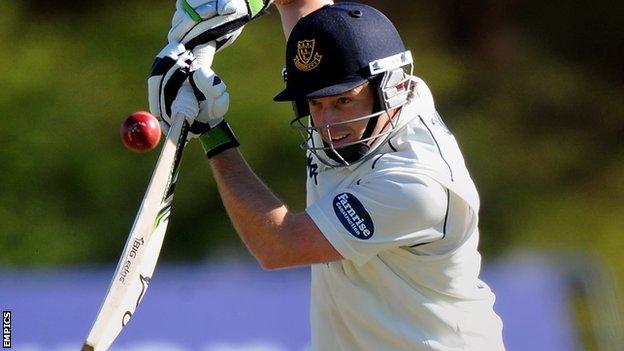 Ed Joyce and Chris Nash shared an unbroken opening stand of 143 as Sussex built a big lead on day three of their clash with Worcestershire.

Joyce was unbeaten on 70, with Nash 69 not out when rain forced an early close at New Road, with Sussex leading by 199 with all 10 wickets intact.

Earlier, Worcestershire added 28 to their overnight score to be bowled out for 259, a first-innings deficit of 56.

Tomorrow Sussex will need quick runs and for Yardy to be brave with his declaration. If he is and Monty Panesar can weave his magic, then Sussex could still claim a second County Championship win of the season

The century stand between Joyce and Nash was their first for a year and put their side into a commanding position before the weather intervened at 15:00 BST.

Nash impressed with his driving and stroked 11 fours, while Joyce displayed excellent timing as he notched eight boundaries and pulled a six off David Lucas.

Earlier, any hopes Worcestershire had of matching Sussex's first innings total disappeared as Jack Shantry, who hit 22 not out, ran out of partners.

Ben Scott was leg before to Jimmy Anyon and Lucas was run out by Nash's quick reactions at short leg before Jones scooped Panesar to mid-on.

VIEWS FROM THE COMMENTARY BOX:

"Pity about the rain as it has messed up the mathematics of the game, Sussex pushing on for a declaration late on the third day or early on the last.

"Nash and Joyce were going well, the latter looking like a different player from the first innings when he scratched around for six in an opening stand of 50-plus.

"While one man never makes a team, the Worcestershire attack is never the same without Alan Richardson. Saturday's run chase - and surely there will be one - will depend upon Michael Yardy's gambling instincts, although it's a while since Worcestershire chased down anything over 300 on the last day."

"Sussex will be cursing the bad weather, with first bad light and then rain, preventing any play after 3pm on the penultimate day.

"Michael Yardy's side have played positive cricket throughout the match, and had the weather not intervened a declaration before the close of play today was not out of the question.

"Tomorrow Sussex will need quick runs and for Yardy to be brave with his declaration. If he is and Monty Panesar can weave his magic, then Sussex could still claim a second County Championship win of the season."