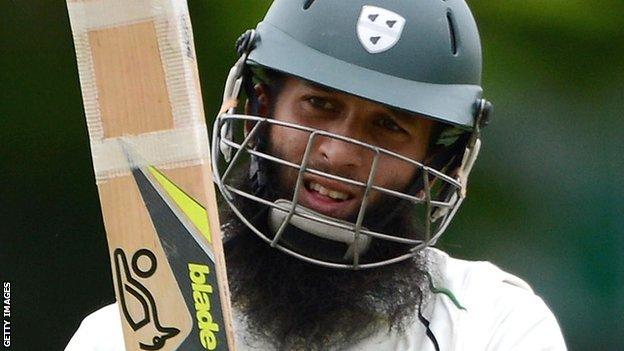 Moeen Ali scored his third half-century of the season but Worcestershire face a first-innings deficit against Sussex.

Ali made 85 in a three-hour stay at the crease as the home side looked set to nudge ahead of Sussex's 315 all out.

But they slipped from 206-4 to 231-7, still 84 runs behind, with Steve Magoffin, Naved Arif and Monty Panesar all taking two wickets.

Earlier, Sussex added 32 to their overnight total with Magoffin ending unbeaten on a season-high 41.

After impressing with the bat against his former club, Magoffin excelled with the ball as nine of his first 18 overs were maidens.

The Australian then came back later in the day with the new ball and got rid of Gareth Andrew to finish with figures of 2-28.

The spinner took the wickets of Vikram Solanki for 34 and James Cameron for 13.

"Another good day's cricket with Sussex taking over in the closing stages, Magoffin adding some good bowling to some useful runs in the morning session.

"Moeen Ali was again out short of a deserved century and he looked suitably aggrieved to be given out to a ball that could well have been missing his leg stump.

"Pardoe again looked the part and Panesar twirled away in front of watching selector James Whittaker - he could be the pivotal man in this game."

"Another day with the initiative swinging from one side to the other, but late wickets with the new ball gave Sussex the edge.

"Steve Magoffin yet again showed what a good signing he has been. Firstly blasting a rapid 41 off just 40 balls to secure a third batting point and then taking 2-28 in 22 accurate overs.

"With an uncertain weather forecast for the weekend, Sussex will be looking to polish off the Worcestershire tail quickly in the morning, and then score runs at a brisk rate to allow sufficient time to bowl Worcestershire out.

"Monty Panesar could hold the key. He bowled well today and could be a handful on the final day on a drying pitch."