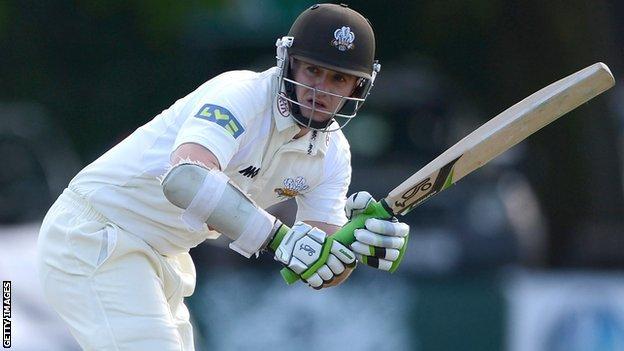 A century from Steve Davies kept Surrey alive in their match against Somerset.

However, the hosts still need to score another 77 runs with only four wickets remaining to avoid the follow on.

Opener Davies scored 104, Zander de Bruyn added 52 and Tom Maynard will return to the crease on Friday morning on 63 not out with Surrey on 286-6.

Overton, who was making his Championship debut and joined brother Craig in the Somerset team, was dropped in the slips on nine before helping his side past the 500-mark.

Surrey made a poor start to their reply as Jacques Rudolph was bowled by Jamie Overton, who claimed a wicket in only his fifth delivery in Championship cricket.

The hosts looked well placed on 188-2 but then lost three wickets for five runs to be back in trouble.

Vernon Philander (3-66) was the pick of the Somerset bowlers as he took the wickets of Jason Roy, de Bruyn and Rory Hamilton-Brown.

But Maynard steadied the ship late on and Surrey's hopes of avoiding the follow on rest on his shoulders.

"A graceful century from Steven Davies, his first of the season, saw Surrey close on 286-6 in reply to Somerset's 512-9 declared.

"Davies made 104 in lovely fashion as Tom Maynard's unbeaten 63 guided Surrey to the close and set up an intriguing third day.

"Somerset were grateful to Jamie Overton's unbeaten 34 earlier in the day to get them up to their declaration total after Surrey's bowlers had picked up wickets in the morning.

"Overton's first-class debut got even better when he bowled Jacques Rudolph with his fifth delivery for one.

"But Davies looked in exquisite form as he glided to his century from 113 balls. After tea, Surrey suddenly found themselves 227-6 as George Dockrell and Vernon Philander combined to put Surrey under pressure.

"Maynard, as he has done all season, adapted quickly to the situation and he formed a crucial partnership with Gareth Batty late in the day to take Surrey to the close.

"Somerset will be happy with their efforts today and Surrey will know there is still a lot of hard work to do. But with Maynard unbeaten they are still very much in the game."