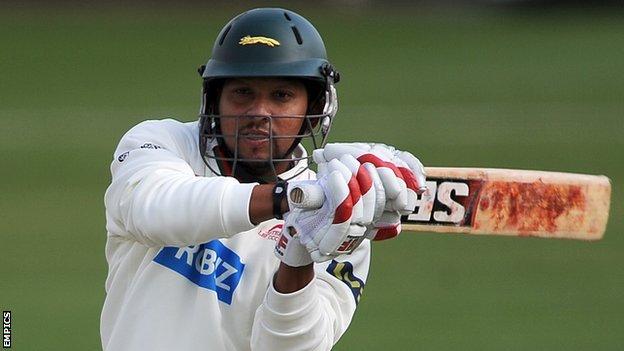 Ramnaresh Sarwan's century helped Leicestershire fight back from a poor start to take control against Essex.

Will Jefferson was out in the first ball of the match against his former county, before Matthew Boyce and Greg Smith were also soon dismissed.

Leicestershire had been reduced to 29-3 before a fine fourth-wicket partnership of 216 between Sarwan (117) and Josh Cobb (80) put the hosts in charge.

Jefferson was making his first appearance of the season after a back injury, but instantly edged a chance to Tom Westley at slip off of Masters' bowling.

But Sarwan, Cobb and Wayne White, who will resume on Thursday morning on 41 not out, left Leicestershire with a chance of claiming their first win since the start of April.

They were helped by some erratic Essex bowling as England Under-19 fast bowler Tymal Mills twice bowled no-balls that went to the boundary over the head of wicketkeeper James Foster.