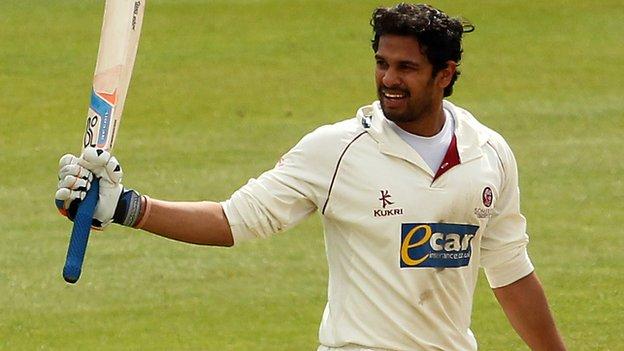 James Hildreth and Arul Suppiah both scored centuries and Nick Compton's fine start to the campaign continued as Somerset dominated against Surrey.

Suppiah made 106 before he was run out, while Compton, who has scored more first-class runs than any other batsman so far this season, added a further 83.

Hildreth won the toss and elected to bat, which proved a good decision as his side scored more than 400 for the second time this season.

Barrow hit 10 boundaries in his entertaining innings, before he was caught at gully by Tom Maynard off of the bowling of Stuart Meaker.

Suppiah's dismissal saw Maynard involved again as his throw was gathered by Gareth Batty, who broke the stumps with the diving batsman narrowly short of the crease.

Compton, the grandson of English batting legend Denis Compton, is closing in on becoming the first batsman since Graeme Hick in 1988 to reach the 1,000-run landmark by the end of May.

However, Compton still needs to score a further 181 runs after he fell 17 runs short of his century when he was trapped lbw by de Bruyn.

That left Somerset on 290-3 but Hildreth and Kieswetter then added 108 for the fourth wicket to help the visitors to all five batting bonus points.

De Bruyn claimed his second wicket of the day when he dismissed Hildreth late on as a frustrating day for the hosts ended on a positive note.

"A very good day for the Somerset batsman who took advantage of an excellent batting surface.

"Suppiah and Hildreth both batted excellently and they were complemented by Nick Compton's 83. The Surrey bowlers stuck to their task but it was hard work as the boundary was found with regularity.

"This was a good toss for Somerset to win and Surrey will look to stem the flow of runs tomorrow [Thursday] morning, and then make full use of the excellent conditions when it comes to their turn to bat."