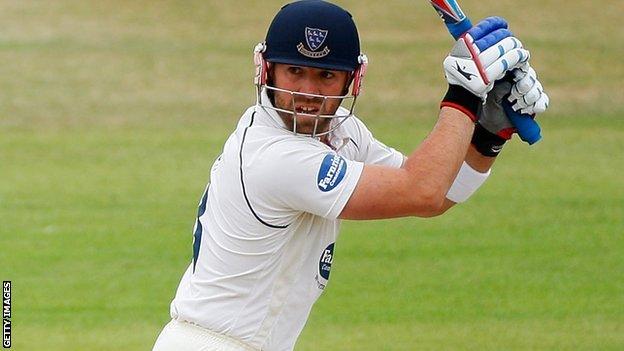 Matt Prior scored a rapid 86 ahead of England's first Test with West Indies at Lord's on Thursday as Sussex and Lancashire played out a draw.

Prior smashed nine boundaries and put on 142 for the fifth wicket with Mike Yardy (63), as Sussex declared on 300-8 after picking up a third batting point.

"A wonderfully entertaining day at Hove, which in some way made up for the disappointment of losing the first three days to the weather.

"Matt Prior and Mike Yardy deserve huge credit for entertaining the crowd. Their partnership of 142 in 24 overs carried Sussex towards three batting bonus points which they secured in the final over of the day.

"Prior showed why he is one of the most destructive batsman in world cricket. His 86 off 80 balls, including four sixes, was a brutal onslaught and augers well for the forthcoming Test series against the West Indies.

"The one area of concern for Sussex will be the form of Murray Goodwin who missed out again scoring just eight, but that apart Sussex will head to Worcester on Wednesday for their next Championship match in good heart."