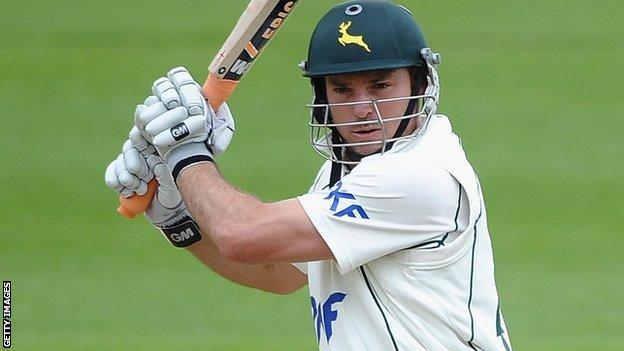 Michael Lumb punished Middlesex's fielding lapses with an innings of 162 as Notts picked up the bonus points needed to go top of Division One.

Lumb was dropped three times on the way to his century, two of the chances put down by England captain Andrew Strauss.

He struck 23 fours in a 309-ball knock before falling to Gareth Berg, but by then Notts totalled 423 despite figures of 4-117 by fast bowler Steven Finn.

Strauss was then caught behind for two as Middlesex slumped to 51-3 in reply.

His dismissal by Harry Gurney was another disappointing setback for the left-handed opener after an innings of 49 in Middlesex's previous game against Worcestershire hinted at a return to form ahead of the forthcoming Test series against West Indies.

Notts wicketkeeper Chris Read then picked up his second catch as Andre Adams found the edge of Sam Robson's bat to send him on his way for nine, and Adams added the wicket of Chris Rogers for six shortly before the close, the Australian perishing at third slip after a loose drive.

It rounded off an excellent day for the home side, who began on 132-1 and, despite losing Alex Hales early for 79 when he was caught at second slip by Strauss off Tim Murtagh, did not waste a promising position.

Lumb played the leading role but he was well supported by Riki Wessels (41) and Steven Mullaney (60), who shared in stands of 83 and 95 before Adams weighed in at the end with two sixes and three fours in his 29 off 18 balls.

"Nottinghamshire have put themselves into a near unassailable position in the match after another strong performance.

"Michael Lumb was outstanding once again with the bat, apart from a sticky spell when he was dropped three times as he closed on his century.

"Middlesex's performance with the ball was improved from the first day but Nottinghamshire's collapse from 328-3 to 423 all out was sparked by their chase for maximum batting points.

"It was a tricky 22 overs for Middlesex to survive before the close but the three batsmen to fall may all reflect that they could have left the balls that dismissed them."

"Notts enjoyed their best day of the season so far, rattling up the runs and then picking off three important wickets before stumps, including that of Andrew Strauss.

"Although we aren't playing right in the middle of the square, Steven Mullaney's huge six off Gareth Berg was one of the biggest blows seen on this ground for many a year - and the first to be despatched over the roof of the New Stand.

"His innings of 60 was a great foil for Michael Lumb, who is in imperious touch at the moment but his innings did contain a touch of farce as he was spilled three times between 86 and 99. Division One cricket is an unforgiving place as Middlesex found out today."