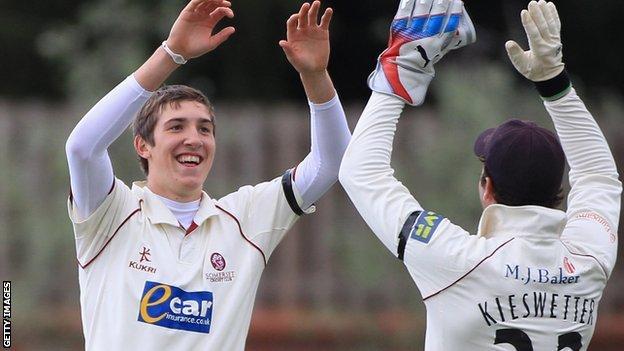 Youngsters Craig Meschede and Craig Overton put Somerset in the driving seat on a hectic opening day against Durham at Chester-le-Street.

Seam bowler Thorp was on a hat-trick after having Vernon Philander and Overton caught off successive deliveries, but Max Waller denied him before the umpires decided the light was too poor for play to continue.

Durham's collapse earlier in the day against a side featuring five players aged 20 or under highlighted the batting problems which have afflicted them this season.

Paul Collingwood's dismissal for four, caught at first slip after trying to drive a ball from Trego, continued his lean spell and Mark Stoneman's 33 was the top score for a side who have only managed one batting bonus point so far this season.

Overton's figures in only his second first-class appearance underlined his potential, while South Africa-born Meschede's performances with bat and ball were the best of his career.

He outscored Kieswetter during his 60-ball knock, but the England one-day keeper still collected nine boundaries of his own including two in one over off Graham Onions in the penultimate over of play.

"Given Durham's problems with the bat this season, Somerset's lead of 95 already looks substantial.

"The home side's total of 125 was their worst in a championship match against Somerset and although the players continue to blame difficult conditions, this was probably the nicest day they have had to bat this season, and they risk being cut adrift at the bottom of the table after just five games.

"Somerset sent out their only 11 fit players and were on the ropes as well in a crazy day's cricket until Peter Trego and Craig Kieswetter got stuck in, adding 95 for the fifth wicket before Craig Meschede and Kieswetter then added another 107 for the sixth. Don't rule out a two-day finish!"