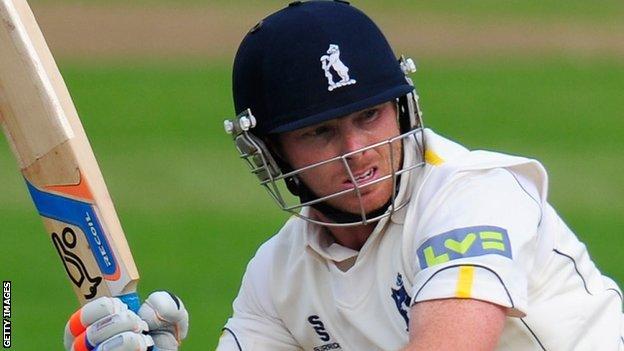 Ian Bell scored a half-century but 15 wickets fell on day one of Warwickshire's match with Durham.

On a day of failures for most England players, Jonathan Trott made only two as Warwickshire slumped to 14-4.

After scoring only 134 runs in nine Test innings against Pakistan and Sri Lanka, Bell hit eight fours in reaching his highest first-class score since August.

He put on 85 for the fifth wicket with Darren Maddy (35) the only other Warwickshire batsman to reach double figures so far.

Earlier, Durham lost wickets at regular intervals but recovered slightly from 103-8 thanks to Onions scoring 36 with the bat after Ben Stokes had made 35.

Durham have already suffered at the hands of Barker, who scored a maiden century off their bowling at Edgbaston last year.