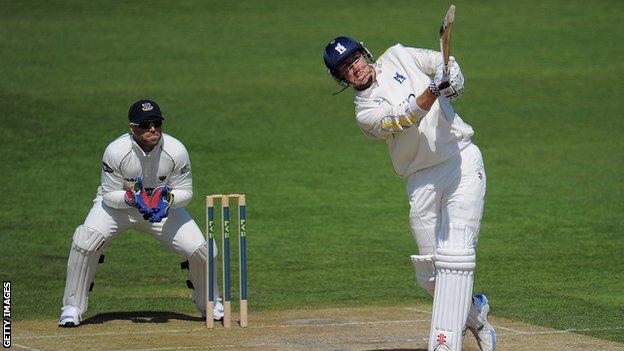 Warwickshire continued their dominance with the bat to seize total control of their Championship game against Sussex at Hove.

England's Jonathan Trott reached 178 before he was caught off Chris Nash (3-44) but Tim Ambrose and Rikki Clarke saw them to a total of 545 all out.

Sussex lost both Nash and Ed Joyce as they replied with 57-2 at the close.

Having resumed on 281-5, Warwickshire soon lost Chris Wright, who was yorked by James Anyon for 15, but the imperious Trott added 110 with Ambrose in 28 overs before he tried to drive Nash's occasional off-spin and edged to slip.

Ambrose later followed in similar fashion when Panesar managed to turn one out of the rough, but Clarke added 69 for the ninth wicket with Keith Barker (33), hitting a six and six fours before running out of partners.

Nash and Joyce launched the Sussex innings with a stand of 39 but the former then played a loose drive at a ball from left-arm seamer Barker on 18 and Varun Chopra took a difficult chance at second slip.

Jeetan Patel won an lbw decision against Joyce, who departed for 14, but Luke Wells and Murray Goodwin managed to see out the final 13 overs, with their side needing to reach 396 to avoid the follow-on.

"Sussex look set for an uphill battle if they are to save this game.

"The suspicion was that the wicket had more life than the Sussex bowlers could extract during the Warwickshire innings, and the early wickets of Nash and Joyce leant credibility to that view.

"Luke Wells, who already has one hundred under his belt, showed the necessary application with his five not out coming off 58 balls, but Sussex will need more of the same over the next two days if they are to avoid their second County Championship defeat of the season."