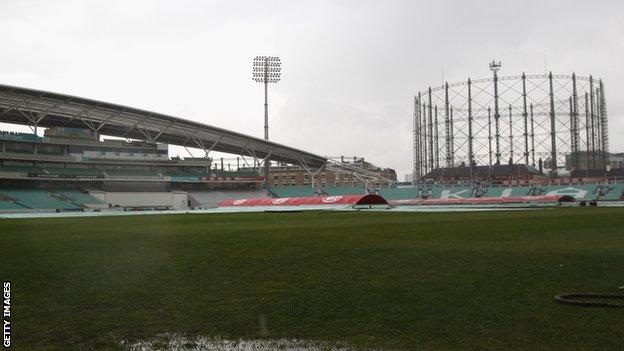 Surrey and Durham endured a second successive blank day in their Championship Division One game because of persistent rain at The Oval.

After Thursday's downpour, the teams returned to the ground to find no let-up in the miserable weather.

Once again, it was not possible to bowl even a single delivery and the umpires abandoned play in the early afternoon.

With more rain forecast, The Oval could be facing its first total washout since a game against Sussex in 2007.

There was some good news for Durham, however, with skipper Dale Benkenstein signing a new three-year deal.

And both teams learned they will have representatives in the England Lions side to play West Indies in a four-day game at Northampton, starting on 10 May, with Surrey pacemen Jade Dernbach and Stuart Meaker and Durham all-rounder Ben Stokes included by the selectors.

"Heavy rain in the morning left the umpires with no alternative but to abandon play just after lunch.

"Great frustration for everybody but hopefully this game can finally get underway on Saturday."