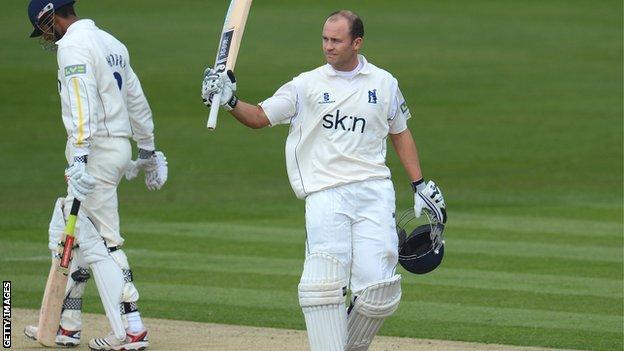 Jonathan Trott hit an unbeaten century but England team-mate Ian Bell was out for a duck as Warwickshire enjoyed the better of day one against Sussex.

Bell lasted only seven balls before he was bowled by James Anyon, while Steve Magoffin (2-56) removed William Porterfield to reduce them to 13-2.

Sussex then hit back late in the day as Warwickshire closed on 281-5.

The day had started well for Sussex after Michael Yardy won the toss. Magoffin struck in his second over when Porterfield edged to second slip and Bell lost his middle stump to Anyon.

But Trott and Chopra batting outstandingly - their stand of 219 in 64 overs a new third-wicket record for Warwickshire against Sussex.

Trott has a liking for the Sussex bowling. He made 134 on his county debut against them in 2003 and two years later scored a career-best 226.

Chopra's 221-ball innings finally came to an end when off-spinner Luke Wells claimed only his third first-class wicket as the opener played across the line.

Sussex picked up two more wickets in the final half-hour. Monty Panesar, benefiting from a switch of ends, had skipper Jim Troughton taken at slip and Magoffin returned with the second new ball to pin Darren Maddy leg before as he shaped to drive.

"Sussex will be disappointed not to have made more of winning the toss and electing to bowl first in helpful conditions at Hove.

"Despite reducing the visitors to 13-2 the Sussex bowling, with the exception of Steve Magoffin and Monty Panesar, lacked accuracy, and Jonathan Trott and Varum Chopra made them pay.

"The new ball will be vital for Sussex. Quick wickets and they are right back in this game but, if Trott stays in, the home side face an uphill battle."

"Jonathan Trott's innings was of a high class. Presented with a difficult situation - he replaced his England team-mate Ian Bell, who had failed to score - Trott timed the ball impeccably from the start.

"Varun Chopra took time to warm up, but later played some memorable offside strokes and would be disappointed only that he didn't press on after reaching his hundred.

"Chopra's dismissal gave Sussex an opportunity to make up some ground in the final 90 minutes, but this total still represents a very sound start."