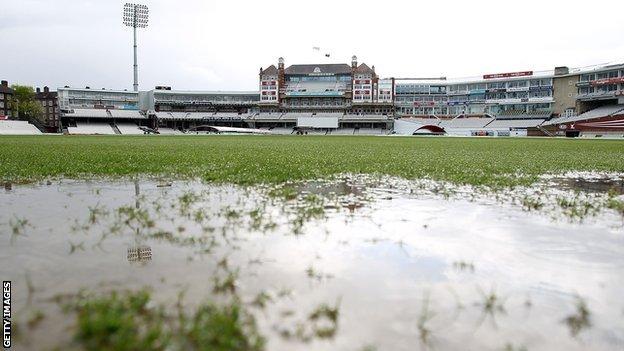 Surrey and Durham were left frustrated after heavy rain caused the first day of their Division One clash to be abandoned without a ball being bowled.

The umpires quickly decided play was not possible as large puddles appeared on the Oval outfield.

Surrey were in a similar position last week as day one of their match against Worcestershire was also washed out.

The hosts have won one out of three matches this season, while the visitors are aiming for their first victory.

"Sadly the weather was the main factor as the opening day was abandoned due to persistent rain.

"Umpires Martin Bodenham and Mark Benson made the early decision there would be no play before lunch. When they did go out to inspect afterwards the heavens opened once again and play was abandoned for the day.

"Fingers crossed the weather is better tomorrow because if the players do get the chance to play some cricket this will still be a very entertaining game."