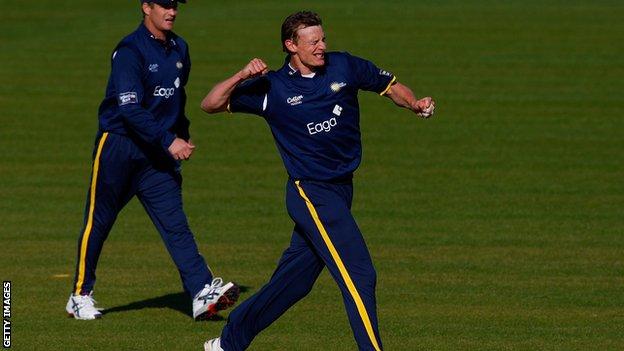 Will Gidman chalked up 56 runs and three wickets to give Gloucestershire the ascendancy over Kent on day two at the St Lawrence Ground, Canterbury.

Starting the day on 131-6, the visitors began well with Will Gidman and Ed Young adding 43 without loss.

Paul Muchall, who replaced the run-out Gidman, added another 50 runs alongside Young for the eighth wicket.

All three men were caught behind by Richard Coughtrie, who also claimed Brendan Nash off Ian Saxelby.

Darren Stevens helped calm the waters with 54 from 90 balls, but he was eventually bowled by Young.

Young had been in stubborn form with the bat all day, playing his part in a 31 partnership with David Payne for Kent's last wicket, and helping himself to a total of 55 not out.

Matt Coles, who trapped Payne lbw to eventually skittle the hosts out, ended the second day 4-43 off 25 overs.