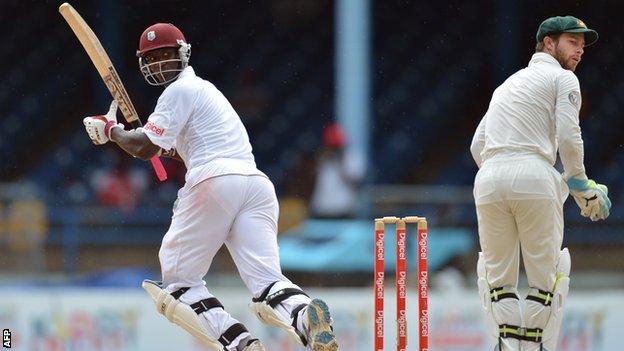 Rain ruined an intriguing final afternoon of the second Test between West Indies and Australia in Trinidad, meaning the tourists keep their 1-0 lead in the three-match series.

Shame about the weather.. Could of been a great finish to a tough test match.

The hosts had been set a target of 215 from 61 overs and were 53-2 after 11 when the weather, which had already caused delays, forced the close.

Earlier, Australia captain Michael Clarke declared with his side 160-8 in order to try and force a result.

The final Test begins on Monday.

Australia, who dramatically won the first Test by three wickets, had resumed the day on 73-3, but lost overnight batsmen Ricky Ponting (41) and Clarke (15) to Fidel Edwards and Darren Sammy respectively.

Kemar Roach then took over to complete his second five-wicket haul of the match for combined figures of 10-146, the first 10-wicket match haul by a Windies bowler since 2005.

Roach's two strikes after lunch came as the Australians look to attack and, after Nathan Lyon top-edged Shane Shillingford to Sammy, Clarke made his aggressive declaration.

Kemar Roach's 10-wicket match haul was the first by a West Indies bowler against Australia since Curtly Ambrose achieved the feat at Adelaide in 1993.

Despite slipping to 13-2, West Indies were certainly looking in the mood to take on the challenge and record their first Test win against Australia since 2003.

Ben Hilfenhaus trapped Kieran Powell lbw then had Adrian Barath caught at slip before home skipper Sammy, moving himself up the order, went on the attack.

He was unbeaten on 30 from 42 balls when the elements intervened for a final time, meaning Australia retain the Frank Worrell Trophy.