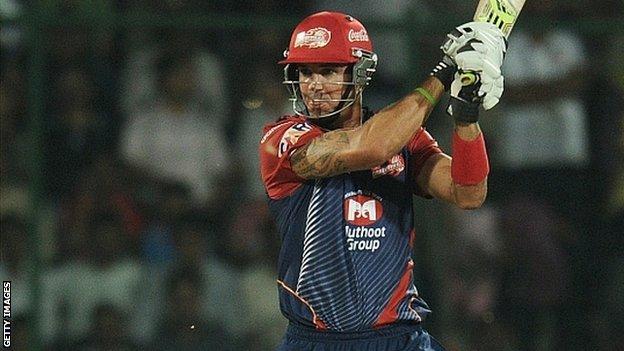 Kevin Pietersen scored 103, his first Twenty20 century, as he led the Delhi Daredevils to victory over the Deccan Chargers in the Indian Premier League.

The England batsman hit his ninth six straight back down the wicket to score the winning runs and lift his side to the top of the IPL standings.

Pietersen, 31, needed only 64 balls to bring up three figures.

"This is absolutely amazing, this is what dreams are made of," said Pietersen, whose previous best was 79.

"You come here as an England player and it's very, very intimidating but to come here and have all these fans cheering for you is very special."

The win sends Delhi above the Rajasthan Royals, having played a game fewer, while Deccan are rooted to the bottom.

Pietersen felt compelled to defend his decision to play in the IPL following suggestions he should be resting before the international summer in England.