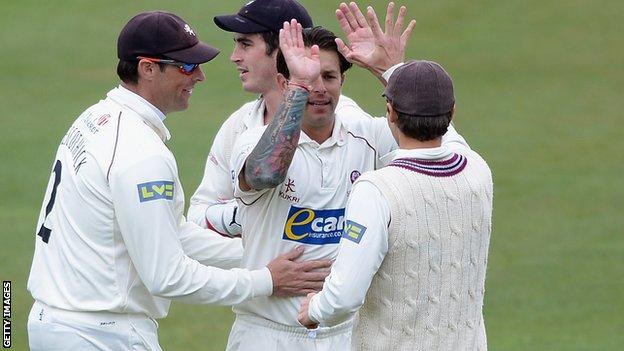 Peter Trego took advantage of bowler-friendly conditions as Somerset reduced Nottinghamshire to 93-6 on a rain-affected day at Trent Bridge.

Captain Chris Read was the only batsman to make an impact and was unbeaten on 52, hitting eight fours and one six.

Play was delayed in the opening session but it was no surprise to see Notts were asked to bat after Somerset skipper Marcus Trescothick won the toss.

Notts were 20-4 at lunch but the visitors had to wait until the eighth over for their first breakthrough when Trego pinned Edwards lbw with an inswinger.

Lumb, who was dismissed in a similar fashion to Trego for a duck.

Hales fought hard for nearly an hour but gave his wicket away, edging Craig Meschede's fourth delivery behind to Craig Kieswetter as he tried to force through the offside.

Patel fell to the final ball before lunch when Arul Suppiah took a fine, diving catch at gully to give Trego his third wicket.

Read went on the attack from the start and quickly pulled Trego for six over the mid-wicket boundary, but he soon lost Taylor at the other end to Steve Kirby.

The Notts captain put on 50 for the sixth wicket with Steven Mullaney in 12 overs, before the latter shouldered arms and had his off-stump knocked out of the ground by Gregory for 10.

More rain followed to take the players off again, but there was time for Read to return and complete his 64th first-class half-century.

"Nottinghamshire will hope the sequence that reads: lose toss, bat poorly, win game, will be extended to a third successive match although you suspect Somerset will relish the opportunity of doing well at Trent Bridge.

"Both captains were as surprised as each other when the line-ups showed the omission of Andre Adams (illness) for the home side and Vernon Philander (back) for the visitors.

"Despite three, or was it four, weather-interruptions, Read made up for losing the toss by batting superbly to reach a high-class unbeaten 52 at stumps."