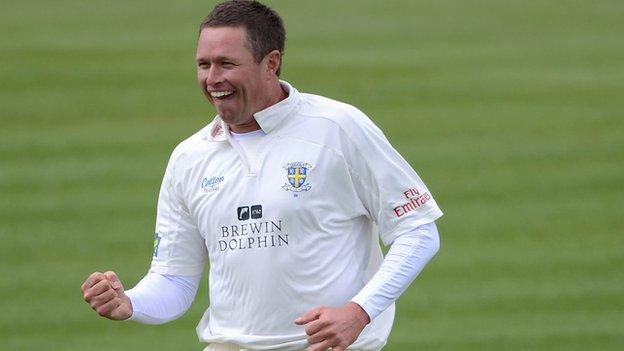 Nottinghamshire were held up by rain and defiant Durham last man Mitch Claydon before clinching their second County Championship win in two games.

Needing just one wicket on the last day at Chester-le-Street, rain forced them back to the pavilion after two overs.

But Claydon holed out to long-on as Durham totalled 253, with Graham Onions 28 not out, to lose by 114 runs.

Onions had been dropped in the slips by Nottinghamshire after they claimed the extra half hour on the third evening.

The Australian, whose previous Durham best was 40 against Lancashire at Old Trafford in 2008, helped put on 73 with Onions for the last wicket.

However, after Andre Adams had been unable to grab the scalp he wanted to complete a five-wicket haul, it was England left-arm spinner Samit Patel who finally made the breakthrough.

"Graham and Mitch went out and enjoyed themselves this morning but we know across the last four days it's been a really poor performance from our batsmen.

"We played some really poor shots. but also got out to some very good bowling. They put us under a lot of pressure and used the new ball well. They were too good for us.

"It's still early days and the weather played a part as well. I wouldn't say we are in a state of shock but we must learn from this quickly. It is a big reality check for us. We can't dwell on it too long though, but we know we have to step up a gear and learn to battle hard."

"This is as one-sided a defeat as I can remember Durham suffering in recent years, particularly at home.

"Their batsmen across both innings were particularly poor, so uncharacteristic of a team expected to do big things this season.

"Mitch Claydon and Graham Onions provided a bit of light relief on the final morning for the 30 or so who turned up to witness it but, from a home perspective, this performance was as depressing as the winter weather which battered the ground over the four days."

"The extra night in the north east was certainly worthwhile for the Nottinghamshire party.

"Notts have a record of starting brightly and then fading but, with some astute signings and key contributions from some of the unsung members of the squad, this could be a year in which Mick Newell's side can sustain their challenge.

"Michael Lumb's innings was the high point of the batting, but the bowling unit again were the real heroes and will now look forward to facing Somerset's impressive top order."