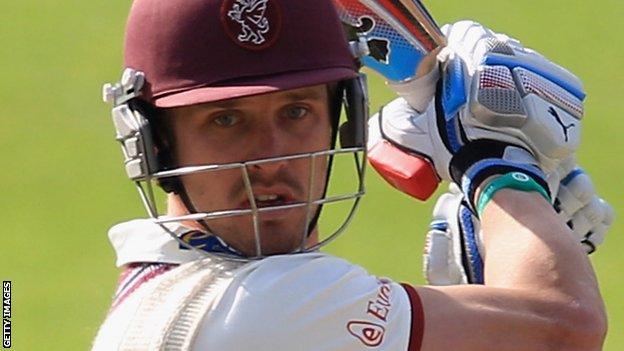 Nick Compton scored a half-century but Somerset remain in trouble after two days against Warwickshire at Edgbaston.

After a first-innings deficit of 96, Somerset reached 127-4 at close on day two, 31 runs ahead, with Compton unbeaten on 61.

"Warwickshire are well-placed to open their season with a victory over Somerset, as they did 12 months ago.

"There was a period this afternoon where they lost control for the first time in the match, as the Somerset second-wicket pair erased their deficit at four runs an over, but Neil Carter ran out Arul Suppiah and bowled James Hildreth to restore control.

"Jeetan Patel spun the ball appreciably in the final session and would be confident of adding to his one wicket so far, while Keith Barker has already made a big contribution, dismissing Marcus Trescothick twice and top-scoring in the Bears' first innings.

"They wouldn't want to chase much more than 150, but will be hoping the target will be quite a bit lower than that."