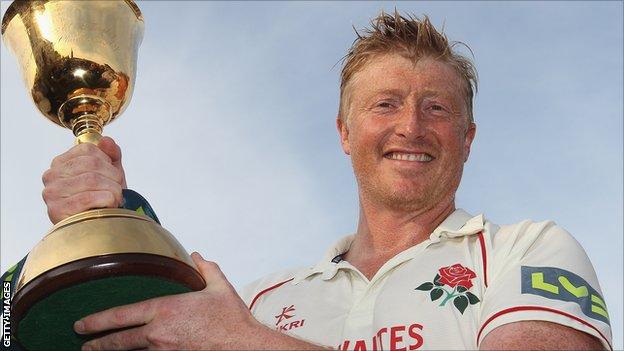 Glen Chapple has thanked his Lancashire team-mates after being named one of Wisden's five cricketers of the year.

Chapple was selected alongside Alastair Cook, Tim Bresnan, Kumar Sangakkara and Alan Richardson after leading the Red Rose to the Championship title in 2011.

The 38-year-old told BBC Radio Lancashire: "Personally I had a good season but that wouldn't in itself be enough normally to win this award.

"The credit has to go to the players for the way they performed last year."

He continued: "It was a fantastic year for Lancashire and all the lads who played so well obviously played a big part in me receiving this award."

All-rounder Chapple, who made his solitary one-day international appearance for England in 2006, made his first-class debut in 1992 and has spent all of his domestic career at Old Trafford.

He was awarded the captaincy in 2009 and bowled through injury in the final match of the season as Lancashire clinched their first outright Championship title for 77 years with victory against Somerset at Taunton.

"I was in pain for the first two days," said Chapple. "I was really lucky to be able to get past that and be able to bowl.

"The last day was an unbelievable day. The lads fought until the end and never gave up hope.

"It looked at one stage that we were second favourites, but we stuck to it, things seemed to fall in our favour and we got over the line."

Peter Moores' side start their first Championship match of the 2012 season against Sussex on Thursday.