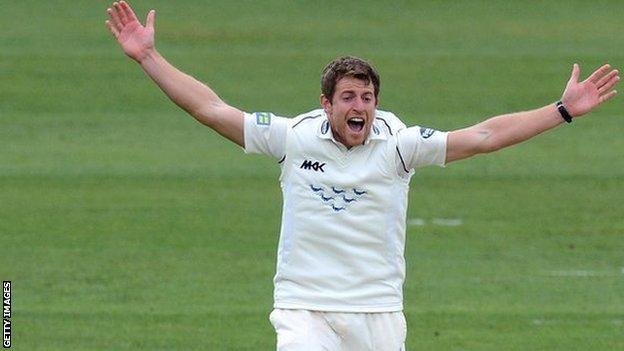 James Anyon claimed the fifth five-wicket haul of his career as Sussex have a 13-run lead over Lancashire after day one at Liverpool.

Last year's champions were skittled out for 124 with Anyon taking 5-36, while Amjad Khan and Australian Steve Magoffin took two wickets each.

Steven Croft (50) was one of only three batsmen to reach double figures.

"Both Michael Yardy and Ed Joyce would have been disappointed with their performances in last week. Today, they more than made up for that disappointment.

"Coming together at 15-3 on a wicket offering help to the seamers, Yardy and Joyce firstly played themselves in showing excellent judgement of when to play and when to leave, and then went about punishing the loose ball.

"Joyce in particular was resolute in defence - his 48 coming in 131 balls. Sussex need more of the same in the morning if they are to build a sizeable lead."