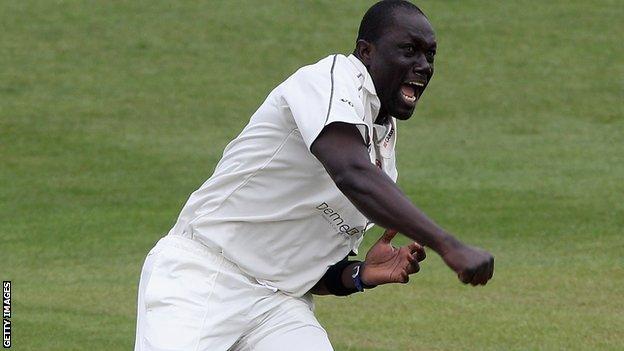 The visitors began the day on 21-1 chasing the 236 they needed but they fell short and could only reach 183.

It was a fine recovery from the hosts as they had lost wickets to both of the first two balls of day one and were also 1-3 early on the opening day.

Both sides were docked points due to slow over rates, with Leicestershire losing five points and Glamorgan one.

"It was an excellent game of cricket - seamer friendly and we saw an unbelievable performance from Robbie Joseph.

"To win the game when we were 1-3 is a fantastic effort. I thought we played excellently in the first innings. We played straight, we applied ourselves, we had patience and we just looked to take the sting out of their bowlers and accumulate some time.

"It is very disappointing to lose, you look at the match it was 53 runs and they batted quite well in tricky conditions on day one and that may have ended up being the difference between the two sides.

"It is tough going at this time of year, it is very early, and the bowlers certainly had fun on that wicket.

"It wasn't a particularly dangerous wicket but the overhead conditions throughout the match were quite tricky for the batters and it swung considerably and they bowled extremely well.

"Joseph, in particular, was outstanding and we didn't respond in the way that we would have liked."

"Glamorgan's top order need to improve before next week's match against Derbyshire at the Swalec Stadium. They slumped to 25-5 and 46-5 in both innings and although the tail-enders made useful contributions, they did not get the support from the recognised batsmen.

"Just one substantial innings from a recognised Glamorgan batsman in the second innings would have gone a long way to securing victory. This defeat was a big disappointment to Glamorgan who were playing a team who had won just a single game last season - and that was against Glamorgan."