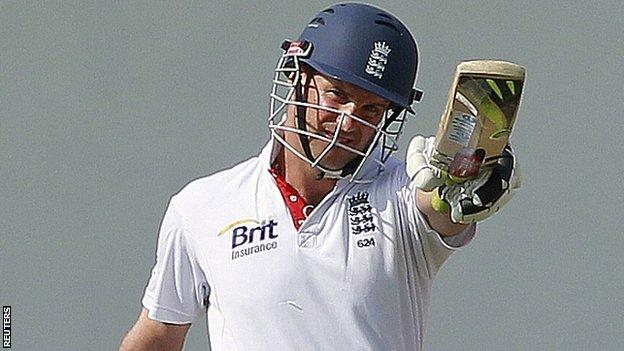 I'm very pleased to see Andrew Strauss post a score, although obviously it would have been nice to see him reach three figures and carry on to get a really big one.

It showed that he is still a high-class player, he still warrants a place in the side and he should still be England captain for the foreseeable future.

But I have to admit that regardless of what he scored in this game I would still have kept him as England captain and opening batsman for the summer.

If a player has truly lost it, there are lots of obvious signs. Their technique is all over the place, their confidence is shot to pieces and their passion for the game is gone. But I don't see any of those traits in Andrew Strauss.

Andrew Strauss and Alastair Cook's efforts have moved them up to third in the table of highest-ever runs scored by an opening pair.

I see a strong character who has been there, done it and succeeded. He has been through a barren run of scores, which 99% of players in their career will go through, whether it is at Test match level or on the village green.

Good players like Strauss come through these tough times and return to the form, and scores, that their record previously has shown they are capable of.

I know what it is like to go through a bad run as a captain and a batsman, and I have my sympathies for Strauss. But as long as you are honest with yourself you have a chance of putting things right.

You need to try to stay as relaxed as possible, look at anything you are doing differently and go back to what you were doing when you were playing well.

As captain, you are acutely aware of the media and public perception of you, and there is never any grey area. You are either the best player in the world or you should not be playing.

STEWART ON THE MASTERS

The Masters is one of the top sporting events of the year and I am looking forward to it immensely. The fact that Tiger Woods has ended his win drought adds extra spice and when you have players of the quality of Woods, Rory McIlroy, Lee Westwood and Luke Donald going head to head, you know you are in for a treat. I'll be watching until the final shot, even if it means a few late nights!

Strauss will have gone into the press conference before the match knowing people would be asking about his future. The media are entitled to ask those questions and Strauss responded accordingly.

But being totally honest and blunt, it doesn't matter what they think. The people that matter are the selectors and you.

If you still believe in yourself you have a chance of putting things right. This group of selectors are loyal and they give people the opportunity to show what they can do so they can come out the other side.

People need to be careful what they wish for when they call for someone to go. You have to look at the bigger picture. What are you getting rid of? Who is going to replace him? Are they ready for the role? What does it do to the team spirit?

He has earned the right to have that little bit of extra slack for when the times are tough.

Strauss's partnership with Alastair Cook has put England ahead after two days, but there is a long way to go and it won't be easy for the new batsmen coming in on this surface.

We need to make sure we get level and then go on to build the kind of lead that puts us in control.