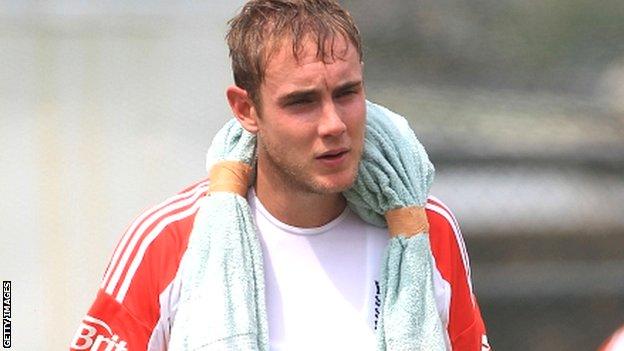 England pace bowler Stuart Broad has been ruled out of the final Test against Sri Lanka after a scan confirmed a strain in his right calf.

The England and Wales Cricket Board said the 25-year-old would return to the UK immediately.

Annoyed to be going home a week early. Not a major injury just couldn't get through a whole Test match. Thanks for the messages

Nottinghamshire seamer Broad will then have further tests before beginning a rehabilitation programme.

Writing on Twitter, Broad said: "Not a major injury just couldn't get through a whole Test match."

He added: "Annoyed to be going home a week early. Thanks for the messages."

England have decided not to call an additional player into the squad, an ECB statement confirmed.

That means Tim Bresnan and Steven Finn will vie for a place in the side, unless both men are selected.

Broad played in England's first-Test defeat in Galle despite struggling with a sprain to his left ankle.

He then suffered an injury to his right calf during the game and was in visible discomfort as he batted in the second innings.

Broad took two wickets, removing the dangerous Tillakaratne Dilshan with the new ball in each innings.

The tests "will determine his availability for all cricket including the Indian Premier League", the ECB statement added.

Broad signed a three-year deal with IPL side King's XI Punjab but missed the 2011 tournament with a side strain sustained at the World Cup.