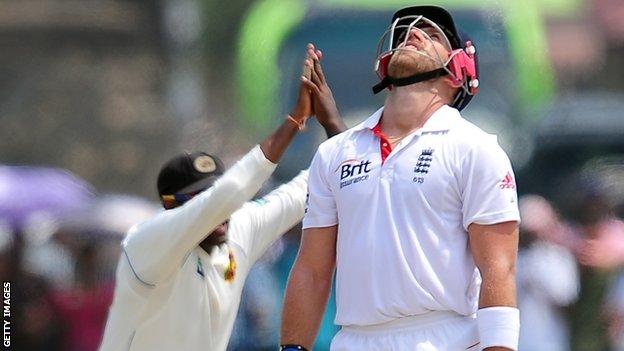 England lost their last six wickets for 31 as they collapsed to a 75-run defeat in the first Test against Sri Lanka in Galle.

But Prior's dismissal to Rangana Herath (6-97) for 41 sparked the latest collapse of what, for Andrew Strauss's side, has been a miserable winter.

Just as in their 3-0 series defeat by Pakistan earlier this year, the failure of the batting order was again to blame, with players unwilling to play patiently on a pitch that seemed to hold few demons.

Trott at least became the first England player this winter to reach three figures, but elsewhere there were injudicious shots as players gifted Sri Lanka - and Herath in particular - their wicket.

However, Trott's patient innings suggested that the total could have been attainable despite England's previous highest chase being 332 against Australia in 1928.

After a gutsy stand between Kevin Pietersen and Trott had kept England in the game on the third evening, the tourists resumed on 111-2, with Graeme Swann suggesting that they would pull off a famous victory.

But having added only one to his overnight 29, Pietersen played a poor shot to off-spinner Suraj Randiv, coming down the pitch and flicking straight to mid-wicket.

There was a more disciplined and watchful mindset from Trott and Ian Bell, the reverse sweep that took Trott past 50 being a rare exception.

Trott survived a scare on 62 when he offered a sharp return chance to Herath, who could not hold on to a one-handed catch to his left.

The curse of the premeditated sweep then struck England as Bell lunged at a straight ball from Herath and was caught on the half volley to a delivery that a review suggested would have clipped off stump.

His Warwickshire team-mate carried on defiantly until lunch and, after the interval, continued to grind down Sri Lanka's attack, supported by an unusually restrained Prior.

When Trott brought up his hundred, England were sensing victory, but Prior then tried to up the ante and lost his wicket when a pull off Herath thudded into short leg's stomach, the catch taken on the rebound.

Cool heads were needed as the tension mounted, but two wickets in quick succession suddenly put Sri Lanka back in the ascendancy.

Debutant Samit Patel failed for the second time in the match, hitting Herath to cover, and Trott's heroic effort was finally ended when he nudged Randiv to leg-slip.

England, who lost their final five wickets for 12 runs, required 84 with three wickets remaining and it proved well beyond them.