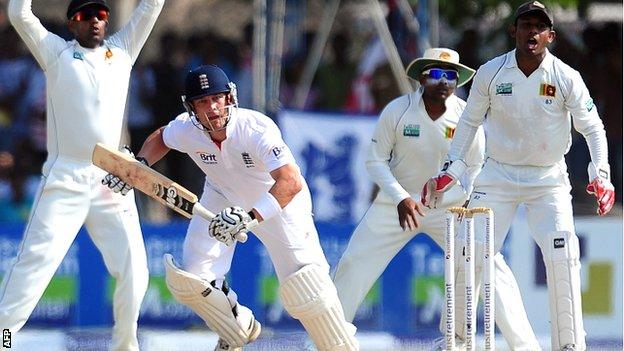 England closed day three of the first Test in Galle on 111-2, requiring a further 229 runs to achieve the highest run-chase in their Test history.

Sri Lanka resumed 209 ahead at 84-5 and England thought they had dismissed them for 167, but Stuart Broad was no-balled when Prasanna Jayawardene had made 29.

Jayawardene went on to an unbeaten 61 before his team were all out for 214.

As regular followers of England will be only too aware, they have only scored more than 300 to win a Test on three occasions in the 135-year history of the game.

They will also not need reminding that the present fragile batting line-up have scored over 200 only twice in seven innings this winter, yet as in the latter stages of day two, there were signs that England could yet emerge from adversity with one of their unlikeliest victories.

The psychological elements of a target approaching 350 as opposed to 293 had the no-ball not been called, and a record final wicket stand at Galle not ensued, had seemed insurmountable on a day of frequent frustration for the tourists.

There was occasional turn but the match was meandering somewhat before Monty Panesar made the breakthrough after 45 minutes.

Dinesh Chandimal had managed to restrain himself from the over-ambitious aerial drive that accounted for him in the first innings when he succumbed to exactly that and looped a catch to cover, Panesar greatly relieved to be bowling and not fielding.

Perhaps Rangana Herath, who captured six first-innings wickets, thought that a lead of 252 was already sufficient when he played an agricultural swipe across the line and was bowled, but with Jayawardene watchfully presiding, 40 were added to demoralise England in a 16-over stand before Chanaka Welegedara was caught in the gully off Panesar.

That frustration intensified after Jayawardene top-edged and Broad took the return catch.

Umpire Rod Tucker was unsure of the delivery, however, and asked for a replay, which showed the bowler's front front was significantly over the line and did little for Broad's volatile temperament.

Jayawardene compounded the frustration with a four and a six down the ground off Panesar to take the lead over 300, and the wicketkeeper reached his fourth Test fifty by pulling Broad over mid-wicket for six.

Having caught the ball successfully the debutant chose to release it because he was wary of the boundary rope, but not only was the chance gone, another six was signalled.

By the time Randiv was run out as his partner looked for a second run, the final two wickets had yielded 87.

Given the circumstances the tourists would have been relieved to survive a seven over session before tea but Cook was given out caught behind off Herath in the second over after the interval, following a review by the astute Sri Lanka captain Mahela Jayawardene.

Strauss looked in no difficulty reaching 27 but then decided to step down the wicket to Herath which resulted in an ungainly smear, and a low catch to short mid-wicket.

Pietersen was badly missed by Kumar Sangakkara at leg gully in an innings combining the authoritative with the peculiar, but he and the dependable Trott played out the rest of the day in relative calm.

The pitch remained placid and the bowling far from treacherous, but England must eclipse their previous highest winning total of 332 at Melbourne in 1928, and Sri Lanka will be confident of improving upon a record of only one win in their last 17 Test matches.