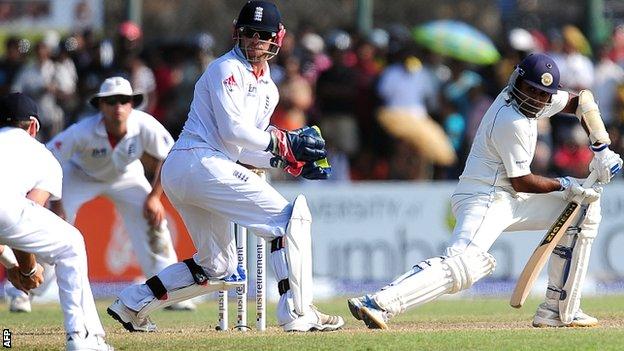 Sri Lanka closed 209 runs ahead of England at 84-5 after an eventful second day of the first Test in Galle which saw 17 wickets fall.

England then subsided against left-arm spinner Rangana Herath, who took 6-74, and were all out for 193. Only Ian Bell, with a classy 52, passed 30.

Graeme Swann, wicketless in the first-innings, revived fortunes with 4-28.

Quite how England have even a glimmer of hope in this match is difficult to fathom following another inept batting display, which was horribly reminiscent of their deficiencies in the 3-0 whitewash by Pakistan in the United Arab Emirates earlier this year.

Mystical spin from Saeed Ajmal's box of tricks was a large factor in their downfall then, but to be perplexed by the round-arm of Herath, who relied almost entirely on mere changes of pace, will be particularly concerning to the England hierarchy.

"England came out and played too positively against orthodox bowling they've have faced since the age of eight. If anything, the ball's spinning more now. England will know they should have got at least 350; the top six have failed again. Bell at least played positively but it was a bit frantic. If Sri Lanka can make even 70 more it will be a really tough chase. If someone can get a big hundred for England they can win the game, but who's going to get that big hundred?"

The momentum created by Jayawardene's brilliance and England's profligacy in the field in the final session on day one continued when four boundaries resulted from the opening over of the day from Anderson to Chanaka Welegedara.

The England swing bowler became England's fifth highest wicket-taker as he bowled Welegedara with a slower ball, and completed his 12th five-wicket haul when he ended Jayawardene's imperious innings with one that took the edge.

That impetus remained with the home team, however, and left-armer Suranga Lakmal swung a fine delivery back in to trap Alastair Cook lbw in the second over.

Jonathan Trott, who clipped two of his first three deliveries confidently for four, missed a full toss from Herath and was easily stumped by Prasanna Jayawardene, before colliding in comical fashion with the wicketkeeper and collapsing on his back in the middle of the pitch.

England were reduced to 42-3 when Andrew Strauss, attempting to sweep, was lbw in Herath's next over. Though initially given not-out by Asaf Rauf, Sri Lanka's successful referral highlighted the error of judgement from both batsman and official.

Sri Lanka had lost their first three wickets on Monday for even fewer before Jayawardene's masterclass, but the omens for a similar recovery from England were not good, given Bell and Pietersen's recent fallibility against spin.

Bell, who launched Herath for an imperious straight six, lost Pietersen to the first ball he faced after lunch, driving loosely at Welegedara and bowled via inside edge through a gaping hole between bat and pad.

Matt Prior and Samit Patel misjudged the length and were trapped lbw on the crease by Herath, but Stuart Broad hit three fours and a six in four balls on his way to 28 to at least help England avoid the ignominy of following on.

Bell completed his 29th Test fifty, scoring more in one innings than he had managed in all six in the series against Pakistan, and had begun to display his stylish repertoire of strokes when he succumbed to the one delivery from Herath that turned significantly, pitching on middle stump and hitting off.

It needed a last-wicket stand of 36 between Anderson and Monty Panesar to ensure the tourists scored more than Jayawardene alone, but the late fluency of runs merely compounded the anguish of the earlier clatter of wickets.

Jayawardene was soon back at the crease after Broad and Swann each took a wicket in their opening over.

Even the captain could not repeat the dominance he showed in the first innings, edging low to slip, leaving Sri Lanka 14-3. Remarkably, they had lost their first three wickets even more cheaply than first time around.

When Swann, in contrast to the forlorn figure of day one, found more turn to have Kumar Sangakkara caught in the gully for 14, Sri Lanka's lead was 166 with six wickets remaining.

The obdurate Thilan Samaraweera made an uncharacteristic charge down the wicket and was neatly stumped to give Swann a fourth wicket, but English optimism will be tempered by the knowledge that the mental state of their batsmen has to be examined again in the final innings.