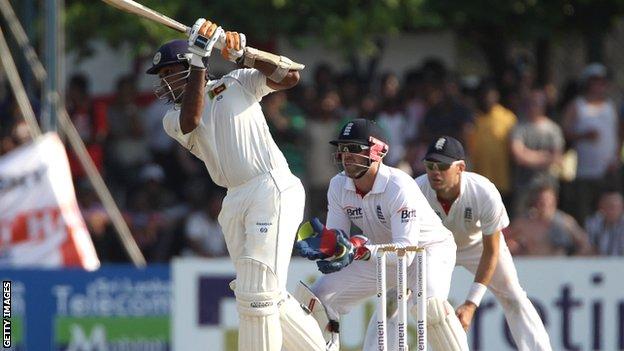 A cultured unbeaten 168 from Mahela Jayawardene lifted Sri Lanka to 289-8 after the opening day of the two-Test series against England in Galle.

The skipper survived four chances, two badly spilled late on by Monty Panesar, but revived his side with 20 fours and three sixes in his 30th Test hundred.

Panesar was one of three spinners, with Samit Patel taking 2-27 on his debut.

"You'd think in a way England might have settled for 289-8 when play began and Sri Lanka might not, but the way things transpired Sri Lanka will have been very pleased to have got there and England rather less so.One hard rule of playing overseas is that it is often the final session when things slip and England will be bitterly disappointed because they were so close to having a really good day."

When England lost the toss on a cloudless day in searing heat at a ground on which they had never won, they might not have relished tackling a Sri Lanka side containing three players with Test averages in excess of 50.

Any anxieties would have been exacerbated in the opening over when they lost the first of their two reviews, an lbw referral rejected as the ball had pitched outside leg-stump.

However Anderson utilised the shine superbly, shaping the new cherry both ways in an opening spell of 2-10 in six overs.

Lahiru Thirimanne edged to second slip and Sangakkara, who has two centuries and six fifties against England, got a thin edge behind after an ambitious drive to a similarly pitched delivery moving away outside off-stump.

Former skipper Tillakarate Dilshan seemed set to play with his usual abandon but departed in the next over when he prodded suspiciously at a well-directed full length ball from Broad and was smartly snaffled at first slip.

The situation called for consolidation and Sri Lanka had the perfect exponents of the art.

Jawawardene exuded calm authority, reminding Swann that he was not content to merely block by taking a step down the wicket and lofting majestically over long-on for six.

Most catches by England outfielder

He had the ideal ally in Thilan Samaraweera, who scored only a single from his first 48 deliveries but when the opportunity arose dispatched the ball in classical fashion to the boundary as the fifty stand was recorded from 154 balls.

However in the second over after lunch a firm straight drive from Jayawardene was flicked into the stumps by Anderson in his follow-through and left Samaraweera short of his ground at the non-striker's end, out in the most unfortunate of circumstances.

It was a timely breakthrough for England as batting had begun to look easier with the softening of the ball, superbly illustrated by Jayawardene, who clipped three boundaries in an over from Anderson with exquisite timing.

With Swann also largely failing to trouble the batsmen, Patel was given an opportunity with his slow left-armers, in England's first three-pronged spin attack since 1987.

Having got off the mark by swiping Panesar for six, Dinesh Chandimal took a similarly ruthless approach against Patel's rather innocuous round-arm, almost whirling himself off his feet with another big hit over the ropes at long-on.

But the cavalier batsman attempted one bold shot too many and on 27, the second best score of the day, sliced to cover to give a jubilant Nottinghamshire all-rounder his first wicket.

Patel was then unceremoniously taken out of the attack in favour of Panesar, who produced a stunning delivery to the new batsman that turned violently away from the outside edge.

Coincidentally Swann then found dramatic turn and bounce from round the wicket to surprise Jayawardene, the ball brushing the glove and squeezing through Anderson's fingers, but it proved the exception to the rule and it was to be an unproductive day for England's first-choice spinners.

After tea, Anderson began to find some prodigious inswing and trapped Prasanna Jayawardene lbw, a decision upheld following a review, while Suraj Randiv fell to a direct hit from Strauss close in.

Deceiving Jayawardene with a cleverly disguised slower ball, Anderson failed to grasp a straightforward return catch, and the Sri Lanka captain nonchalantly dispatched the next ball into the leg-side for six, reaching his century from 200 balls in the next over with a delicate fine sweep.

Patel returned to trap Herath lbw for five and end a partnership of 62 but his reward was again to be immediately taken off as England took the second new ball.

But Panesar returned to his dark fielding days of old when the ball went inexplicably through his hands to reprieve Jayawardene twice, firstly on the square-leg boundary off Anderson on 147 and again when the ball followed him to mid-on off Broad.

However unfortunate, the failure to dismiss the captain will have taken some gloss from England's day, 121 runs were scored in the final session, and it remains to be seen how significant the dropped catches prove to be.