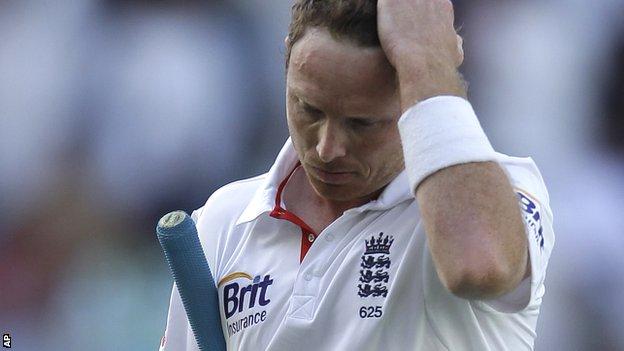 England have left batsman Ian Bell out of their one-day squad to face Pakistan in Abu Dhabi and Dubai - but uncapped spinner Danny Briggs gets a call-up.

Bell's place goes to Jos Buttler, who has played four Twenty20 internationals yet is awaiting his one-day debut.

All-rounder Tim Bresnan is included, subject to fitness, after missing the Test series with an elbow injury.

Briggs and Buttler impressed on the recent England Lions tour, as did Alex Hales, who is in the Twenty20 squad.

England will play four one-day internationals and three Twenty20s against Pakistan between 13 and 27 February, with the games split between Dubai and Abu Dhabi.

A warm-up game against the Lions on Friday, 10 February will give Bresnan the chance to prove his fitness.

Bell appeared in only one of the five ODIs against India in October, when England suffered a 5-0 whitewash, and struggled in the recent Tests, which Pakistan won 3-0.

The Warwickshire man had particular trouble against off-spinner Saeed Ajmal during the Tests, and only made 51 runs in six innings at an average of 8.50.

National selector Geoff Miller said: "We have selected two squads that include both experienced international players and younger players who have performed strongly for England Lions in recent months and deserve an opportunity to further test themselves against quality opposition.

"Playing against Pakistan in the UAE will be challenging, but it is important that these players continue to develop their skills so that we are able to make strides in limited-overs cricket, particularly on the subcontinent."

Pace bowler James Anderson is named in both squads, having been rested for the India series. He has not played for England in the shortest format since 2009.

Who is Danny Briggs?

Broad's recall alongside Anderson means there is no place for young seamers Stuart Meaker and Chris Woakes, or the experienced Graham Onions, who replaced the injured Woakes midway through the India trip.

Hales is the only man in the Twenty20 party but not the ODI squad, with one-day captain Alastair Cook and fellow batsman Jonathan Trott overlooked for Twenty20 duty.

There are no fewer than three wicketkeepers in both squads, although Craig Kieswetter is likely to retain the gloves ahead of Jonny Bairstow and Buttler.

However, Kieswetter looks likely to bat in the middle order - as he did on the Lions tour - after team director Andy Flower confirmed to BBC Sport that Kevin Pietersen will open the innings, as he did at last year's World Cup before he was forced to return home with injury midway through the tournament.

Meanwhile, Pakistan have named 11 of the 12 players who featured in the Test series in their one-day squad, with opener Taufeeq Umar the only man to miss out.

Former skipper Shoaib Malik was a late addition to both squads at the request of captain Misbah-ul-Haq.

The Twenty20 squad is broadly the same, except without batsmen Azhar Ali and Younus Khan, and with the addition of uncapped batsman Awais Zia.