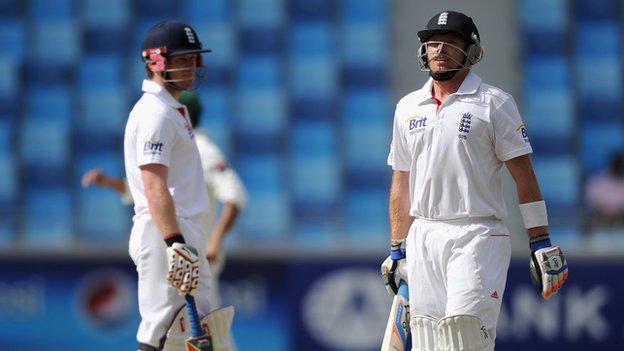 As much as we wanted to talk up the prospect of England pulling off a remarkable victory, the reality is that it doesn't happen very often and defeat was always the most likely result.

There were one or two signs that some of the batsmen were starting to come to terms with the conditions, but of course it was too late.

It's certainly been a wake-up call for anyone in the England team who thinks they have the right to the number one Test ranking, because they haven't.

It is a big setback, and will be a very bad experience if they take nothing from it, but if they have an idea in their minds how they are going to play in Sri Lanka and in India later in the year, then all is not lost.

Overall, I thought it would be much closer than it has been. I didn't appreciate how far Pakistan had come since the spot-fixing crisis.

Eoin Morgan's place will be under threat, and so will that of Ian Bell

Under Misbah-ul-Haq they have made a fresh start and I was very impressed by them. They have gone from a side that had questions over their integrity to probably the most professional Pakistan team I have ever seen.

The impressive thing about Misbah is how calm he is. He is an authoritative figure, who I don't expect takes fools gladly. He and coach Mohsin Khan clearly have a good relationship and they seem to be doing the right things.

Even after they dropped three second-innings catches, they didn't lose the plot, and that often happened with Pakistan teams of the past.

England now have some serious thinking to do before the two Test matches in Sri Lanka in March and April.

I simply don't think its right that players can be picked match after match if they are not performing, and it would not be remotely right if the same top six rock up and play in the first Test in Galle because they have failed here.

They need to give someone else an opportunity, because Sri Lanka would be a good chance to blood a young player.

Eoin Morgan's place will be under threat, and so will that of Ian Bell. I know he has been in good form over the past year but he looks totally bereft of confidence and the shot he played to get out today - slapping a wide Umar Gul long hop to point - showed exactly what his frame of mind is at the moment.

I would also hope that the selectors would think long and hard about Ravi Bopara. It would seem that he's next in line for a place in the team because he's here.

However, there are players like James Taylor, who has been making stacks of runs in county cricket, and the likes of him need to be shown that there is a route into the England team.

It would be welcome for a player like him to go and learn on the tour of Sri Lanka.