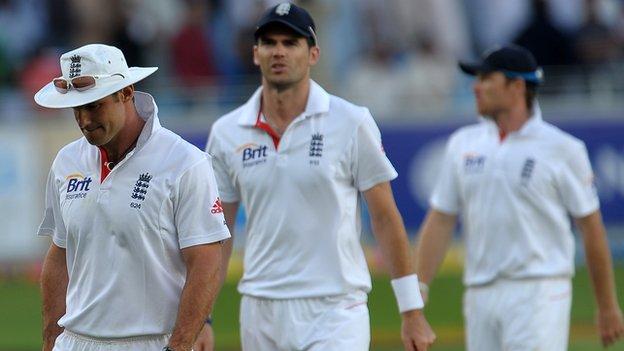 Younus Khan and Azhar Ali have given England's batsmen a lesson on how to play in these conditions.

After all, these conditions are not especially difficult, they just require some hard work, patience and discipline at the start of an innings.

It was fascinating to watch them, one an old pro, the other a youngster, bat Pakistan from 27-2 to a position where England will be facing a mountain of runs when they come to bat again.

Their untroubled progress proved that the pitch was not to blame for what happened in the first four sessions of the match and, judging from the way England carried themselves in the field in the last hour, the odds are the tourists won't be able to save the game.

Their last throw of the dice will come in the morning, with the second new ball only two overs old.

England need to bundle out the rest of the Pakistan batsmen before too much more damage is done but already you feel that the minimum chase they will be facing is 250, and I wouldn't think there's a huge amount of confidence among England supporters that they will get that.

They looked as though they weren't in control of the situation, and they were right to feel that way. Younus and Azhar had played so well and England know the game is slipping away.

The only difference from the first day was the application of the batsmen, because the bowlers still bowled well. The problem for England was, as the partnership continued to grow, the pressure of the match began to tell.

As to England's batsmen, I was bemused by their approach.

James Anderson getting bowled aiming an expansive drive at Abdur Rehman in the first over of the day was typical of the way both sides had batted in the series up to that point. It was very casual way to get out.

Then Andrew Strauss, in what can only be described as an aberration, tried to hit the ball to Abu Dhabi and was stumped for only the second time in his Test career.

It really did suggest desperation, as did England's display in the last 45 minutes of the day.

When Swann hit Azhar on the pads, even from where I was commentating, it immediately looked too high.

I don't blame England for reviewing it, but when the decision came up on the screen the reaction of some of the players was astonishing.

Trott openly laughed and shouted "no way", Prior was also laughing and Swann looked as if he couldn't believe it. They looked as if they had been betrayed by everything - a classic sign of a siege mentality.

I think that was a very worrying sign and not the response of a team likely to offer the sort of resistance needed to save this game.