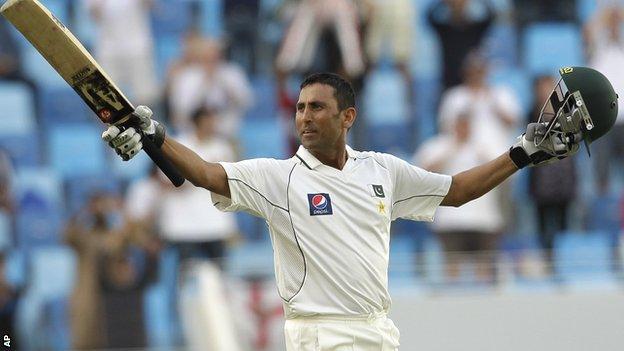 Younus Khan hit the first century of the series to move Pakistan closer to a whitewash over England on the second day of the third Test in Dubai.

Earlier, Andrew Strauss made 56, but a series of poor shots saw England bowled out for 141, with left-arm spinner Abdur Rehman claiming figures of 5-40.

The meek manner in which the England tail surrendered was made to look all the more woeful by the ease with which Younus and Azhar accumulated runs in the afternoon and evening sessions.

Resuming on 104-6 with a lead of only five, the tourists may have believed that positive batting was the key to obtaining a sizeable first-innings lead.

Instead, England tossed away wickets and were then punished by the patience and application of Younus and Azhar.

Younus, strong on the leg side, and Azhar, watchful but willing to hit the spinners in the air, mixed careful defence, calculated aggression and good running between the wickets to all but bat Strauss's side out of the game.

We have seen two sessions of quality batting. It has put the pitch into perspective and shown it is a good one for batting. We haven't mentioned DRS because these two quality batsmen have played textbook cricket. Graeme Swann has looked very innocuous

Twenty wickets had fallen in the first four sessions of the match, but such was the Pakistan pair's comfort at the crease, England barely beat the bat or found cause to appeal.

The tourists' attack, hitherto the only thing keeping them competitive in the three-match series, stuck to their task but were made to look short of ideas.

The performance of Graeme Swann was particularly disappointing, with the Nottinghamshire off-spinner often straying down the leg side.

His spin partner Monty Panesar was more accurate and did find some turn, but that may only serve to encourage the Pakistan spinners when England come to chase a fourth-innings target.

It was once again the combination of Rehman and Saeed Ajmal that wrapped up the England tail inside the first hour.

James Anderson aimed an expansive drive at Rehman and was bowled through the gate in the first over of the day before an Ajmal doosra pinned Stuart Broad lbw on the front foot, a decision originally given not out but overturned on review.

Strauss showed his eagerness to attack by advancing down the wicket to the spinners and brought up only his second Test half-century since last winter's Ashes.

However, when again trying to use his feet to Rehman, he was deceived and stumped by a distance, leaving Swann to hole out to deep square leg.

Homing in on history

England had nevertheless earned a lead of 42 and looked well placed to put Pakistan under pressure once Anderson enticed Taufeeq Umar to offer an edge to Strauss at slip.

Mohammad Hafeez departed soon after, lbw aiming a wild sweep at Panesar, but that was to be England's final success of the day.