Paralympic gold medallist Hahn, who finished in 13.09 seconds, slumped to the track as Breen shrieked in delight.

Breen's win secures the first track and field medal of the Games and Wales' third gold of Birmingham 2022.

It is also the first medal by a Welsh woman in track athletics at the Commonwealth Games since Kay Morley won the 100m hurdles in 1990 in Auckland.

"I am absolutely over the moon. Ten years' hard work and I've never run this fast. I am really happy," Breen said.

"I just can't believe it and I want to thank my team for believing in me.

"Obviously this year I've had a really good season and Sophie has been a really good rival for years and I knew that it would come, and it did come!"

Breen's victory over Hahn marks a remarkable reversal in the pair's form and fortunes from last summer's Tokyo Games. In Japan, Hahn defended her T38 title in imperious style, with Breen a distant seventh.

It initially seemed as if a similar result was in the offing.

Hahn drove out of the blocks and led at 30m, but Breen built speed to dismantle the gap and power away to victory.

The pair's rivalry has not always been friendly.

On an evening where Para-athletics took the lead, seven-time Paralympic champion Hannah Cockroft and England team-mates Kare Adenegan and Fabienne Andre completed a clean sweep of the T33/34 100m.

The only slight disappointment was that Cockroft's time of 16.84 seconds failed to improve on her own world record of 16.39 set in victory in Tokyo last summer.

In the previous race, England's Emmanuel Temitayo Oyinbo-Coker was engulfed by friends and family as he rushed to the stands after taking the T45/47 100m title in 10.94 seconds ahead of Australia's Jaydon Page and team-mate Ola Abidogun.

There were also medals for the host nation in the field.

Olympic bronze medallist Holly Bradshaw pulled out before the start of the final, having not recovered sufficiently from injuries picked up when her pole snapped in a freak accident at last month's World Championships in Eugene.

Canadian defending champion Alysha Newman then also retired from the contest, clearing the way for Australia's world bronze medallist Nina Kennedy to claim gold with a best of 4.60m.

England's Caudery, who finished fifth as an 18-year-old at Gold Coast 2018, earned second on countback after she and Australia's Imogen Ayris both cleared 4.45m.

England's Josh Zeller backed up his fifth-place finish at last month's World Championships with progress to the 110m hurdles final.

The 21-year-old was third fastest across the two heats with a time of 13.35, ahead of team-mate Andrew Pozzi in 13.41. Olympic champion Hansle Parchment is among a clutch of Jamaican contenders for Thursday's final.

Guernsey's British champion Alastair Chalmers finished third in his heat and had to rely on his time of 50.39 seconds to carry him into the 400m hurdles final. The 22-year-old seems unlikely to trouble Jamaica's impressive Jaheel Hyde or British Virgin Islands' defending champion Kyron McMaster on Saturday evening.

In the absence of countryman and reigning champion Joshua Cheptegei, Jacob Kiplimo retained the 10,000m title for Uganda, stretching away to victory in a new Commonwealth Games record of 27:09.19.

His record came despite his celebrations starting 40m from the line and his having enough reserves of energy to warm down with a jig of delight. 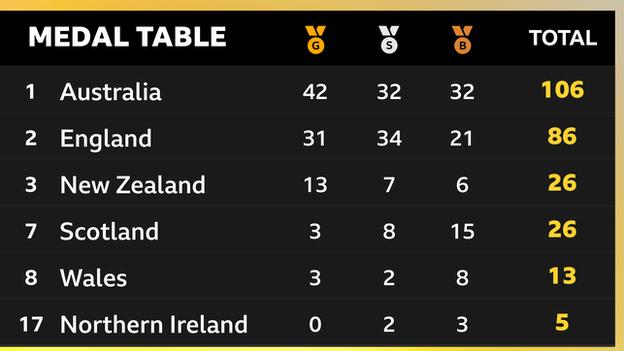 More from the Games