"Australia and New Zealand have conquered the world for a long time. But we've finally broken that seal."

A last-gasp goal secured victory by the smallest of margins, but handed England the biggest of results on the world stage.

At its most basic, this was the team ranked third in the world beating the team at the top of the standings for the first time in a major tournament.

But, as player-turned-pundit Tamsin Greenway told BBC Sport, it ensured netball has a "new world order".

'A seismic shift in power' 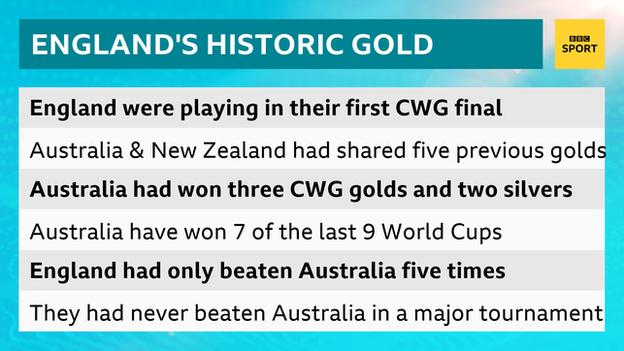 England's primary aim coming into the Commonwealth Games was to reach the final. That would have been enough to make history.

Australia and New Zealand had contested all five finals since netball was introduced to the Games in 1998, but there were rumblings of an upset before the event.

England secured their best ever finish in the Quad Series in January, beating New Zealand and South Africa to finish second, with the former fast approaching a crisis.

And so it proved in the group. Neville's side eased through their pool, securing a record win over New Zealand in the process.

They almost faltered in the semi-final against Jamaica, but goal shooter Jo Harten scored the first of their last-second winners as England reached their first final at a major tournament.

Neville said her side could "just enjoy the final" - but they were not done yet.

Australia head coach Lisa Alexander said before the Games that there had been a "seismic shift of power".

But even she could not have predicted how seismic that shift would be.

In 2008, England goalkeeper Geva Mentor made a pioneering move which would help pave the way for their golden moment on the Gold Coast.

The Bournemouth-born defender became one of the first English players to feature in the Trans-Tasman domestic league.

And plenty of English players followed - including five of England's starting seven in Sunday's gold-medal match.

In fact, of their 12-strong squad on the Gold Coast, nine have played domestic netball in either Australia or New Zealand.

"It's made a tremendous impact," said Mentor. "We've had the skill and the talent, we just haven't had that mental belief to grind games out."

Greenway - who won two Commonwealth bronze medals with England, and moved down under the same time as Mentor - agrees the Australian experience is "a game-changer".

"It's helped us hugely," she told BBC Sport. "They've opened their door, created that competition and swept up all the best players across the world.

"England players are their team-mates now, and the players are no longer untouchable. There is no fear."

She was so dominant she forced the shooter to the bench at half-time.

"You're not looking at them as your heroes, they're your team-mates and someone you can beat up every day," added Greenway.

"Mentor showed that in the final. She's the only player who can get in Bassett's head, and she proved why she's the best goalkeeper in the world."

England have come agonisingly close to upsetting the odds in the past.

At the 2010 Commonwealth Games in Delhi, they led New Zealand in the pool and Australia in the semi-final, before faltering in the final quarters of both matches.

In Glasgow in 2014, they lost to Australia by a single point in the group, and by the same margin to New Zealand in the semi-finals. They finished fourth.

They went one better at the 2015 World Cup - winning bronze - but there were fractures behind the scenes and their assault on the top two looked to have stalled.

Neville, the interim head coach during the World Cup, got the role on a permanent basis in September 2015 and set to work on the team's mentality.

"We said after Glasgow they needed to grow in mentality," she told BBC Sport.

"Over time, they've been exposed in different ways but they've flourished as individuals, and as a team they became gold medal-winning."

Mentor added: "We've had talented girls over the years, but what has changed is the belief and confidence we've had.

"We've been talking the talk for a number of years so to finally be able to get out there and show what we're made of, I hope it's a sign of good things to come."

Bigger than the World Cup? 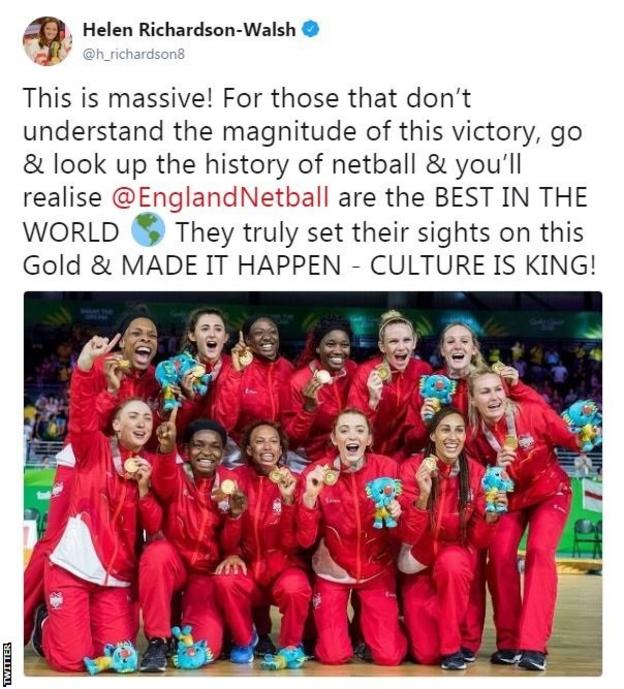 Of all the sports on the Gold Coast, netball perhaps boasts the strongest field.

The top 12 teams in the world qualified for the Games, and a Commonwealth gold medal is as sought after as the World Cup title - if not more so.

Netball has Olympics status but has never been included in a Games, so this is its only opportunity to be a part in a multi-sport event.

England revelled in the opportunity - despite the weight of history being against them.

In the five Commonwealth Games prior to those on the Gold Coast, Australia had only lost two of 40 matches - both gold-medal finals against New Zealand.

But the 10-time outright World Cup winners relinquished their seemingly unbeatable status at home as England spoiled their party.

"We just hope every little girl watching grows up and wants to be an England netball player."

That was the view of England centre Jade Clarke, who came on in the final quarter to win her 150th England cap.

The 34-year-old, now a veteran of four Commonwealth Games, is one of four England players aged 30 or over in the squad.

Indeed next year's home World Cup - which takes place in Liverpool in July - could well be the swansong for a large portion of this England side.

And they have their sights set on backing up Sunday's historic victory with another.

"This group has to stay together," said Greenway. "They'll want to finish off this four years. They are now the team to beat, but they shouldn't be fearful."