Helen Housby scored in the final second to give England a 52-51 victory.

Having staged a dramatic comeback to beat Jamaica in the semi-finals, the Roses matched the hosts 25-25 at half-time of their first Commonwealth final.

And they shocked the home crowd by overturning a four-point deficit in the final quarter to claim a dramatic win.

"It's my dream come true," said head coach Tracey Neville. "The girls have worked so hard over the last international phase.

"Australia are the renowned, world number ones and to beat them at that time, I'm really, really proud - the feeling of that is amazing."

This was the first time since netball was introduced at the 1998 Games that the final did not feature both Australia and New Zealand.

Australia knocked out New Zealand - who were beaten 60-55 by Jamaica in the bronze-medal match - in the semi-finals, but could not deny third-ranked England.

Buzzer-beater - England come from behind again

England recovered from a six-goal deficit against Jamaica and, having trailed by two at three-quarter time, fell four behind early in the final period against the hosts.

But they came back and, with the scores at 51-51 with 20 seconds remaining, England took the final centre pass of the game.

Jo Harten - England's hero in the semi-final win - failed to sink a rushed attempt at goal with the clock down to five, and Housby's effort also fell short.

But a late contact call saw Housby given a second chance, and she slotted the winner on the buzzer.

"As a shooter you dream of that moment. Commonwealth Games final, last-second goal, but you never believe it's really going to happen. It's the best day of my life," she said.

"To be honest, it was kind of all a blur. All I remember was having the ball in my hands and then running away screaming because the final whistle had gone.

"We've been trying so long to break the curse of bronze. Every single box has been ticked."

England captain Ama Agbeze said: "There was limited sleep last night so it's really impressive we managed to turn the happiness of yesterday around.

"I think Australia have felt under pressure this whole tournament. I had confidence after coming from six down against Jamaica and we felt comfortable."

England had only beaten Australia five times in their history before Sunday - but not since 2013 and never at a major tournament.

Having made a first major final in their history, they played with confidence throughout and it was hosts Australia who failed to deliver under pressure.

Australia head coach Lisa Alexander was forced into four changes at the break and moved goal shooter Caitlin Bassett to the bench after she was dominated by England goalkeeper Geva Mentor, playing in her fifth Games.

Mentor - Bassett's captain at Sunshine Coast Lightning - matched up to the 6ft 3in shooter, with England's experience in the Australian domestic league fuelling their victory.

Eight of England's 12-strong squad have experience playing down under - including attacker Chelsea Pitman, who won the World Cup with Australia in 2011 before switching allegiance to England in 2016.

It is the best result in England's history, having previously won silver at the 1975 World Cup in a round-robin format, and Neville's side will be confident of making more history in 2019 when Liverpool hosts the World Cup. 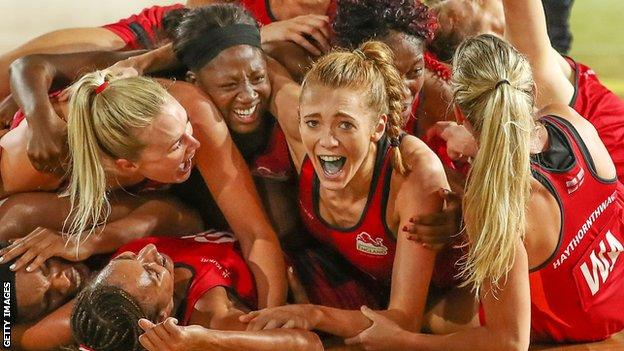 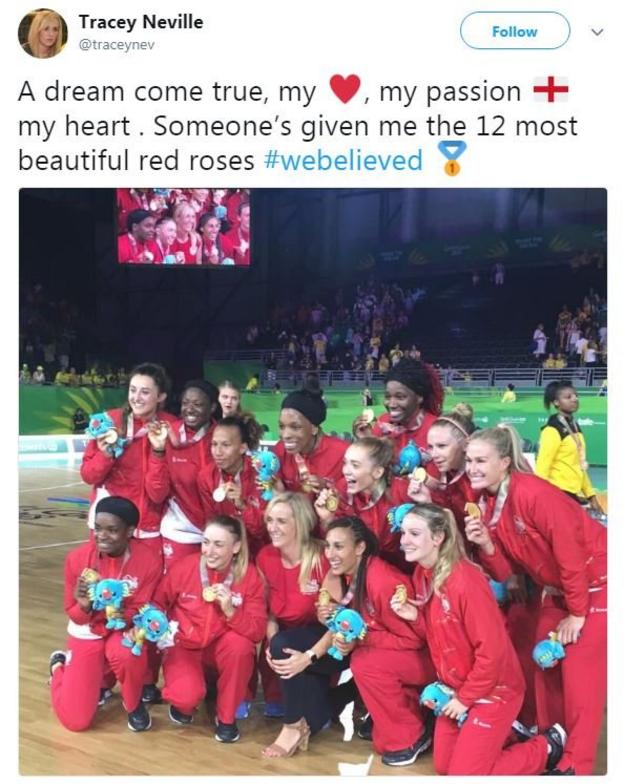 Two-time Commonwealth bronze medallist Tamsin Greenway: Sometimes things are just written. No words can describe that England Netball doing something we've all dreamed of. Thank you

Olympic bronze medal-winning swimmer Steve Parry: Wow.. wow...What a finish to the #CWG2018 Aussies may top the table at a home games but Tracey Neville and England Netball left a parting gift.

BBC athletics commentator and 2000 400m Olympic bronze medallist Katharine Merry: I am shaking... that was amazing. The arena stunned as the English go wild.....COMMONWEALTH CHAMPIONS... the team led by Tracey Neville and all her staff and players.. you absolute beauty!