Smith and Sarah Walker were beaten 21-12 21-12 by Malaysia's Mei Kuan Chow and Vivian Hoo in the doubles final.

Rajiv Ouseph won bronze in the singles on Saturday, and also contributed to a third-placed finish in the mixed team event.

That meant England finished the Games with six badminton medals - their best Commonwealth haul for 16 years.

The Adcocks' preparations were severely disrupted after Gabby sustained an ankle injury in January, which restricted her to just one week of full training before the Games.

"I was just so happy I could play," she said. "I like to come into tournaments feeling prepared but to have pretty much a week to prepare, this has exceeded my expectations."

Chris said: "This is very special. Standing on the podium, with the England flag going up, is an unbelievable feeling but doing it with your wife is something I can't even explain."

Olympic bronze medallists Ellis and Langridge pulled off a stunning victory in the semi-finals, defeating Malaysian favourites Goh V Shem and Tan Wee Kiong, who finished one step higher on the podium in Rio.

And the English pair dominated in the final against India's Satwik Rankireddy and Chirag Chandrashekhar Shetty, needing just 39 minutes to wrap up a straight-game win.

Victory ensured Ellis clinched a full set of gold, silver and bronze medals at these Games, while Langridge completed the set following his mixed doubles silver at Glasgow 2014.

"I've been waiting for this one because at the last Games I didn't manage to get a gold," he said. "That was my main objective when I came here to try and complete the set.

"It's not as good as Marcus who did it in one Commonwealth Games, it took me two. I'm obviously very pleased. We composed ourselves and performed well, and we are both so, so, pleased to have won." 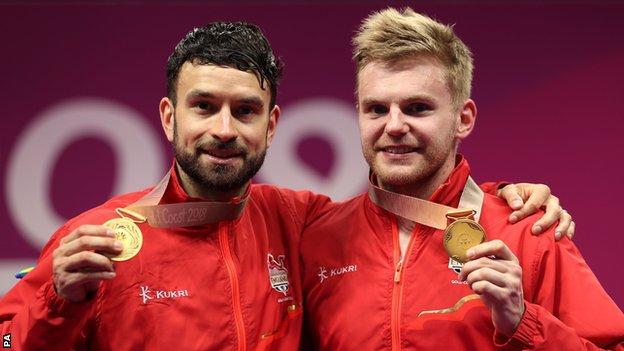