At the end of a dramatic, and historic, day for her husband, Alex, and his three mates, Ronnie, Derek and Paul, Diane Marshall was standing outside the gate of the Broadbeach Bowling Club awaiting the arrival of Scotland's latest gold medallists.

It was obvious that she'd been crying - "Oh, greetin' all day," she said. "Greetin' with worry and happiness. I'm an emotional wreck." No wonder. The final, against Australia, had been a bit of an epic, a draining experience for the nearest and dearest of the four Scots out there in the middle.

Twenty six years ago, as multiple champion in the ladies section of her own bowling club, Diane first met Big 'Tattie' Marshall, the emerging star of the green. He made an appearance to help out at Diane's club awards night, a night where she happened to win all the awards.

Since that night, the couple have have been inseparable, united by a love of bowls. Their parents, their grandparents, their wider family members - all bowls. When Tattie won his seven world outdoor titles, Diane was there. When he won his 12 indoor titles, she was never far away. When he won Commonwealth Games gold in Manchester in 2002, Melbourne in 2006 and double gold in Glasgow in 2014, Diane was greetin' the whole time.

So what a lovely moment that was when her husband, now the holder of five Commonwealth Games gold medals which is one more than any other Scot in history, walked through the gate, hugged her, handed her the little souvenir koala bear that all medallists are given and then took out a hankie for her tears. "You're supposed to be smiling not crying," he joked.

This was a day for all four men. Ronnie Duncan and Derek Oliver played wonderfully in winning their second gold medal in their first Commonwealth Games. Paul Foster, equally. Foster is Jack to Tattie's Victor or Victor to Tattie's Jack. It doesn't matter. The point is that they are close and that they understand each other and that they're mates.

And they needed to be mates, all four of them. They needed to be tight because it was tough out there. In the final, they trailed nearly all the way. After four ends, they were 8-2 down, after eight ends they were 11-6 down. After 11 ends they were still 12-8 down. In their semi-final against England, the Scots had given their rivals a 7-0 start but slowly they reeled them in. And here again questions were asked and questions were answered. "I said to the boys, 'we've got to battle away and battle away' and I knew we could do it," said Tattie.

"I've watched so many games over so many years and I never lose the faith," said Diane. The woman knows her stuff. And yet there was a dramatic endgame. In the last end, Australia led 13-11 but Scotland were holding three with Tattie about to roll. Scotland had come back from the brink and were in a winning position. He pondered his best play. 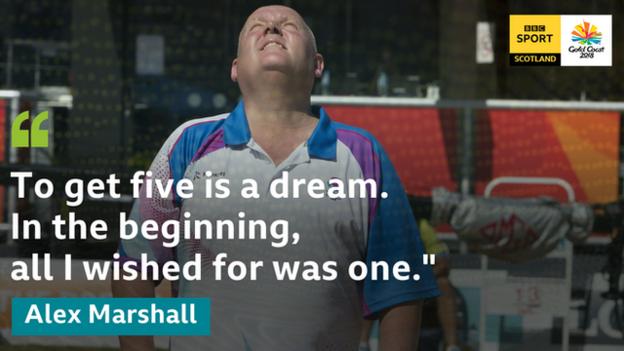 "I thought, 'that's our chances blown', and I'm sure these guys would have given me a kicking. They were worrying times. You can see me with my hands on my head. I thought it was gone, but thankfully they missed the drive by a fraction. If they'd killed it at the end I would have been very upset with myself."

Instead of a horror show it was history. Five Commonwealth Games golds - one more than Allan Wells, one more than Neil Fachie. Tattie spoke about that, spoke about how he had it as a target in the back of his mind and how privileged he felt to be doing what he's doing. "To get five is a dream," he said. "In the beginning, all I ever wished for was one."

Mostly, though, he spread the love. He talked about his team-mates and how nothing could be possible without them. He talked about the support staff. He talked about the opportunities he has been given by the funding of Sportscotland. "There are so many people to thank along the way," he said. "And I'm not finished yet. I've got a few more years left in me."

His team-mates acknowledged the great man in the aftermath. Foster called him the best player in the world. "The man is hungrier than ever," said Foster. "We're so proud of him." Duncan said that he felt relaxed out there knowing that Tattie was with him. Oliver simply said: "He's incredible. A superstar and a friend."

Tattie was just about the coolest man in the place. He gave Diane a kiss and smiled at her greetin' and then went off for a drugs test and, you must assume, a celebratory sherbet or two. "We'll have a nice party," said Diane. "These are special days and we'll never, ever take them for granted. These are amazing days for all of us."