Hall and Wilson won gold in the men's team final on Thursday and the two gymnasts continued their fine form in a closely fought competition.

Despite nursing a wrist injury, Wilson, 22, posted 15.100 on the horizontal bar to steal victory.

The 17-year-old registered a combined total of 53.150 to finish third.

"I could have done a lot better today, my beam performance was quite wobbly, the floor landing was the same thing. So yes, I could have done better but I'm still proud of what I achieved," said Kinsella.

Nile Wilson went into the final rotation in joint-first place with Marios Georgiou of Cyprus, but maintained his composure to secure the title.

"That was one of the most incredible experiences I've ever had," said Wilson.

"It was a battle on the high bar. You can't write it, to finish the way like it did. That was one of the best high bars I have put together."

Wilson, the 2016 Olympic bronze medallist on the horizontal bar, finished with a final score of 84.950 to better his third place in Glasgow four years ago as Georgiou took the bronze.

Hall, 22, had temporarily moved into the gold medal position before Wilson pipped his team-mate on the final routine as England celebrated a deserved one-two.

Scotland's Frank Baines finished just outside the medals in fourth, with his compatriot Hamish Carter in sixth.

In a scintillating competition on the Gold Coast, Leeds-born Wilson began as favourite in the absence of reigning all-around Commonwealth champion Max Whitlock.

England's Whitlock chose to sit out the event to focus on the individual floor and the pommel titles, and watched from the stands as his England team-mate took his title.

Wilson made slow and steady progress up the leaderboard after modest performances on the floor and the pommel - a routine that had to be adapted to accommodate his injury.

He was pushed all the way after a fine outing from Hall, and the English pair went into the final rotation with just 0.025 points between them, with Georgiou, who had led throughout, also matching Wilson's score.

Georgiou was a surprise contender for the title after a series of falls in the qualification round, but all three nailed their high bar routines in a tense finale.

And it was Olympic medallist Wilson who came out on top - much to the delight of his dad, who celebrated madly when he won.

"There were some tears from my dad," Wilson added.

"He pointed at me and said 'you're gifted, boy' and that got me. My family are the reason I do what I do. I just want to thank everyone back home." 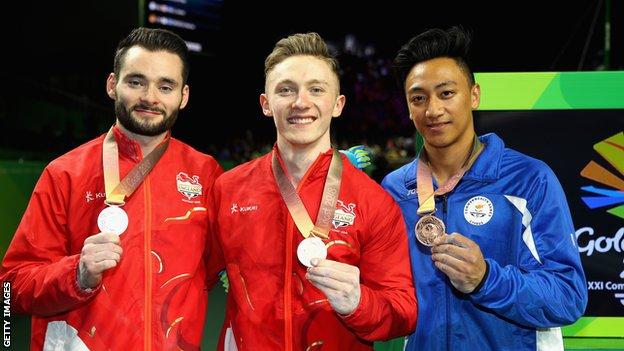