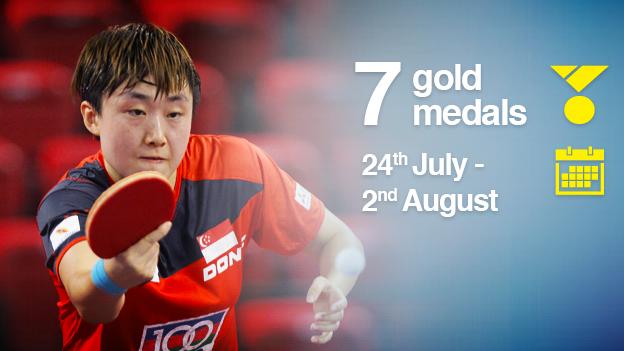 Sometimes described as "chess played at 100mph", table tennis calls for lightning-quick movement, razor-sharp reactions as well as the tactical nous to outmanoeuvre the opponent.

There are singles, doubles and team competitions for both men and women, as well as a mixed doubles event, with both group and knockout stages involved.

England's Liam Pitchford has been scaling the world rankings, while in April his team-mate Paul Drinkhall became the first British player to win a World Tour singles event for 18 years.

Singapore are head and shoulders above the rest - they won six of the seven golds on offer in Delhi in 2010, and will have their eyes on a clean sweep this time around. Their star player is Feng Tianwei, and the 27-year-old is likely to add a few more golds to her already extensive medal collection.

No major changes but unlike in Delhi, there will be no wheelchair event in Glasgow. The International Table Tennis Federation has decreed that from this month, new plastic balls will be introduced in major competitions, including the 2016 Olympics - but the old-style celluloid balls will be used in Glasgow.

Table tennis helped end the Cold War - in 1971, a group of US players became the first Americans to visit China since it had become a Communist state in 1949. The trip, which spawned the phrase "ping pong diplomacy" is often credited with reviving diplomatic relations between the two countries.