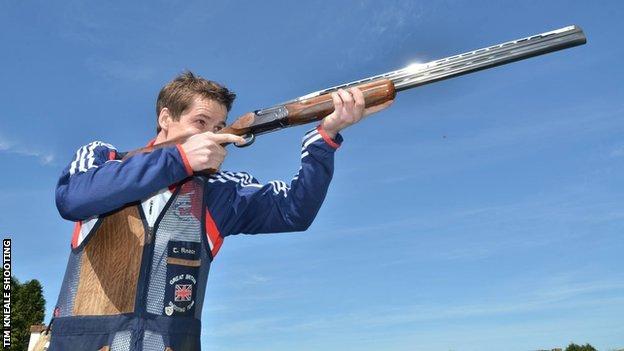 Isle of Man shooter Tim Kneale has set a new world record for the double trap event at the Munich World Cup in Germany.

He said "I can't believe it, a new world record! I must thank everyone who has helped me achieve this."

Kneale will again represent the island at the Commonwealth Games in Glasgow.

In Delhi he finished third in the same event after a tense shoot-off with Indian pair Ronjan Sodhi and Asher Noria.

The shooter from Jurby said he is looking to improve on his bronze in Glasgow.

"The target is gold but to win any medal for the Isle of Man would be brilliant," he admitted.

The Commonwealth Games is the highest level at which a Manx sportsman or woman can represent the island.

"I'm lucky enough to have competed in international events for a number of years but generally when you are on the world stage, you're competing under the British flag," Kneale said.

"It's a great feeling to stand there and look around you at all the other competitors and think that you, from a small country like the Isle of Man, can beat most of them."

The Isle of Man will send 11 shooters as part of