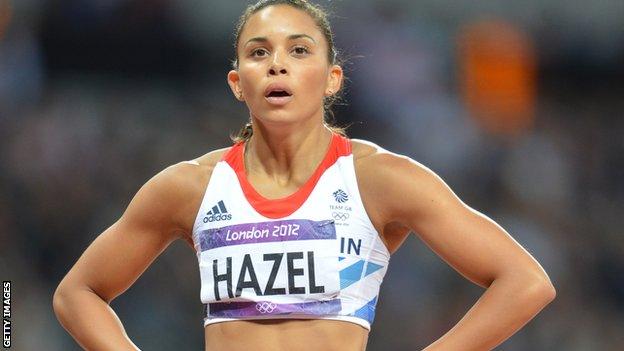 England heptathlete Louise Hazel will not be attempting to defend her Commonwealth title at Glasgow 2014.

She had planned to end her retirement to compete in Scotland but suffered an illness setback in training.

"I was always going to be up against it time-wise and the race to get fit just proved to be a little bit too close," the 28-year-old told BBC Sport.

Hazel, who won gold in Delhi in 2010, will now work for BBC Radio 5 live in Glasgow.

The Birchfield Harrier, whose personal best of 6,166 points set in Germany in 2011 had ranked her as the seventh best British heptathlete of all time, retired from the event in September 2013.

Hazel reversed that decision but had a recent flare-up of the ulcerative colitis condition she suffers from.

She added: "I was forced to abort training for a little while and I just thought this was not the preparation you want going into a major championship.

"I am disappointed not to be competing and representing England. It's a shame to be missing out.

"I wanted to be in tip-top shape and I thought I have the opportunity to do other things now and that for me is a real positive, to finish on a high and just move forward.

Hazel is now expecting England colleague Katarina Johnson-Thompson to win gold in Glasgow following her recent victory at the prestigious Hypo-Meeting in Gotzis.

The 21-year-old Briton scored a world-leading 6,682 points on her debut in Austria, setting a personal best to go third on the British all-time list behind Olympic champion Jessica Ennis-Hill (6,955 points) and 2000 Olympic champion Denise Lewis (6,831).

Johnson-Thompson said Hazel's absence from the Games was a "huge shock".

She told BBC Sport: "I'm gutted for her. My first senior international was with Louise and I was sharing with her in London 2012, which was one of my best experiences. It would have brought back some memories to compete against her."