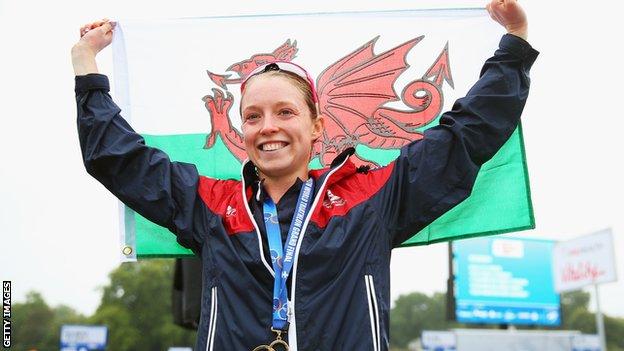 Jenkins is currently fourth in the ITU standings, although Stanford has struggled with injury that has spoilt her title defence hopes this year.

However, there is no place for Ironman world champion Leanda Cave, with Holly Lawrence taking the third women's spot.

Stanford won the ITU World Triathlon Title in 2013, though a foot injury ruled her out of early races in this year's championship and has made a title defence unrealistic.

"I have to let go of that hope of defending my world title," Stanford told Sport Wales.

"But it does mean I can put all of my focus into the Commonwealth Games and hopefully deliver the goods."

Speaking about fellow Welsh triathlete Jenkins, Stanford previously said: "It will be fantastic being in the same team as her.

"Hopefully we can work together to produce the results that Wales want."

Jenkins came fifth in the triathlon at the London 2012 Olympics, higher than any British woman in the history of the Games.

She is currently in fourth position in the ITU World Triathlon Series with four races still to go, while two of the three athletes above Jenkins are from the United States - making them ineligible for Glasgow 2014.

"I think we'll have one of the best teams going forward to the Commonwealth Games," Jenkins told BBC Wales.

"I haven't actually raced Non for over a year, and obviously she's coming back from an injury.

"I think the women's triathlon... might be the first medal event of the games.

"To have a Welsh medal would be amazing at the first event.

"I don't really mind which one it is, so long as it's a medal that would be great."