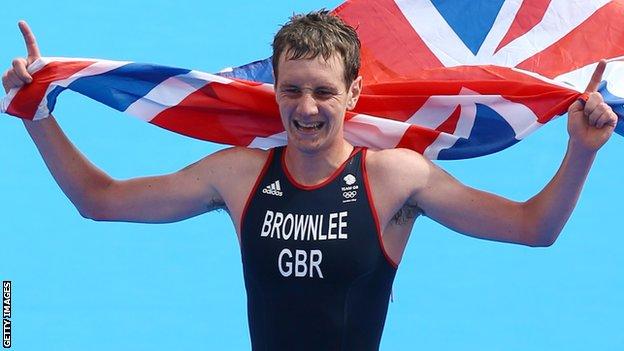 Olympic triathlon champion Alistair Brownlee will not run in the 10,000m at this year's Commonwealth Games.

After winning triathlon gold at London 2012, the 26-year-old Briton said he was thinking of doubling up in Glasgow.

But injuries have forced him to focus only on triathlon, in which he is targeting a third world title.

"I had originally intended to aim for the 10,000m in Glasgow, but that's off for me now," he said. "The focus, for now anyway, has to be triathlon."

Brownlee's attempt to win the world title over the Olympic course in London's Hyde Park last September was ended by a persistent ankle problem.

And he missed his first scheduled ITU Triathlon World Series race of the season, in Cape Town last weekend, with a minor calf strain.

He hopes to return in the next round in Yokohama later this month, but has ground to make up on reigning champion Javier Gomez, who has beaten Brownlee's brother Jonathan into second place in the first two races of the season.

Brownlee, in his column in the Metro, said: "I've had a very mixed last six months and I don't want to jeopardise my comeback as I look to regain the world championship crown.

"I'm under no illusions as to how difficult it will be this season with Gomez in the sort of form he's in. He is as strong as ever."