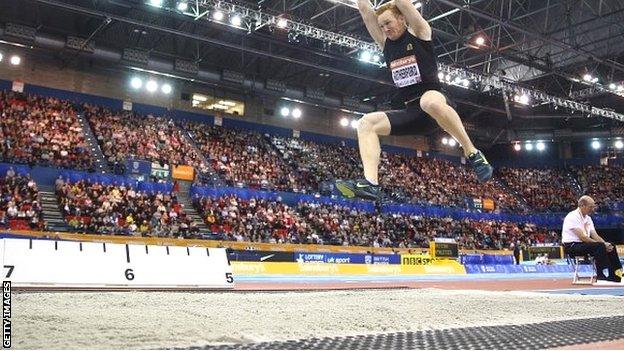 Britain's Greg Rutherford plans to "shut up" critics who say he was lucky to win Olympic gold, by claiming the Commonwealth long jump title in July.

Since winning at London 2012, the 27-year-old failed to make the 2013 World Championships final in Moscow after a hamstring injury hampered his build-up.

"When I was a kid always trying to get to where I eventually got to, a lot of people said it'd never be me," he said.

"Now they say I'll never do it again. I'll shut up everybody by jumping far."

Rutherford was chosen for the one place at the World Championships despite failing to achieve the qualifying standard and finished 14th after a best leap of 7.87m - well down on his victorious 8.31m in London.

To compound a disappointing 2013, Rutherford also lost his sponsorship and parted company with his American coach Dan Pfaff.

However, he began his 2014 campaign in encouraging fashion with 8.00m to secure third place behind world champion Aleksandr Menkov (8.14) and Jinzhe Li of China (8.12) at the Indoor Grand Prix in Birmingham on Saturday.

It was his first indoor long jump competition for four years but the Milton Keynes athlete will miss the World Indoor Championships in Poland next month and head to San Diego to focus on the Commonwealths, which take place in Glasgow from 23 July - 3 August.

"Saturday was a good day for me and hopefully it will start to silence a few of those people when they realise I can still compete," Rutherford said.

"Eight metres is not the most impressive distance in the world, but ultimately I know where that puts me in the grand scheme of things.

"It makes me angry when former athletes have a pop and they are very quick to forget how it was when they were athletes."

Rutherford also confirmed that he wanted this year to try his hand at Winter Olympic sports, and, following the gold medal success of Lizzy Yarnold in Sochi, the skeleton in particular.

He said: "I could be awful at them and if I am I'll put them to bed. I don't want to have that never knowing. I've wanted to try it for years and years, it's just never happened.

"I really want to do skeleton. I love the idea of it. It really excites me."