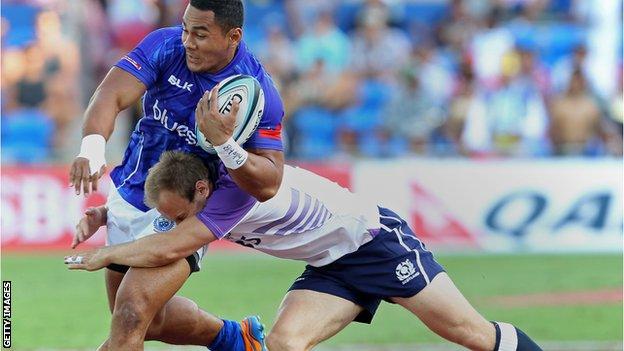 Viliamu Punivalu, the coach of the Samoan rugby sevens team, has only been in the job since July but is already convinced that victory on the field is linked to an integral part of life on the Pacific island. Brotherhood.

The sense of togetherness that permeates Samoan society, coupled with the skills and conditioning training he instils in the team, are his ingredients for success - the stepping stones on the road to planned victory at the 2016 Olympic Games in Rio de Janeiro.

However, before he enjoys the warm sands of the Copacabana beach, Punivalu has another important date in the more sobering weather of Glasgow at the Commonwealth Games.

"It starts inside Samoan homes - the bond between brothers and sisters and parents," he reflects.

"We bring that same outlook from our own individual families into an environment when we get together as a group (to play rugby)."

Family and religion, mostly Christianity, are at the heart of Samoa and this is no different in rugby sevens.

Punivalu, who coached Samoa's Under-20s team at the World Cup in France this year before taking up the new role, said the idea of a team as a "family" existed long before he arrived.

The coach was speaking from a training camp as his team prepare for the Dubai leg in the HSBC Sevens World Series, known as the IRB Sevens, on 29 and 30 November.

In the camp, 14 players and the management team start their day with prayers and religious songs.

After training the service is repeated before the group sit together and talk about any issues. The "family" then settle down for an evening meal.

Thirty-eight-year-old Punivalu, who gave up a job as an engineer to become the sevens coach, added: "You can feel the togetherness of the group.

"Those are the moments that when you are playing hard in a game, you reach out and you remember those moments. You play for each other."

The Samoans are focused on success in Rio, and see the Commonwealth Games and this year's Sevens Series as the key preparation for Brazil.

New players, who are predominantly in their teens or early 20s, have been introduced to the team.

All you can do is try and bridge that gap and bring something new up your sleeve for the very experienced New Zealand side. We have to try and work hard and on the day it is all up to the boys

Punivalu added: "I came into a team that needed a lot of work and a shift of culture.

"We make sure that everyone is expected to train and improve themselves on strength and conditioning and to make sure they value the blue jersey."

Punivalu's captain is Reupena Levasa, who is also a schoolteacher. Levasa knows that to win this year's Sevens Series and next year's Commonwealth Games, the Samoans will need to beat the favourites New Zealand.

He said: "New Zealand is a very consistent team in every tournament, so if we beat them it is a big step for us.

"We have the cultural values of respecting each other, and work together as a team."

The All Blacks, coached since 1994 by Sir Gordon Tietjens, are the dominant force in sevens rugby. They have won 11 of the 14 Sevens Series and are the current World Cup holders.

Since the Commonwealth Games in 1998, when rugby sevens was introduced to the programme, New Zealand have won all four gold medals on offer, with a certain Jonah Lomu in the inaugural winning side.

The Samoans, which with its population of 185,000 is tiny compared to the millions of its main opponents, have yet to win a medal but have a good chance in Glasgow after finishing fourth in last year's Sevens Series behind New Zealand, South Africa and Fiji.

With the latter nation currently suspended from the Commonwealth and its games, Samoa may just find itself on the podium after the tournament in Ibrox Stadium next summer.

"We have to do better than the last time we were at the Commonwealth," said Punivalu, citing the island's fifth-place finish in 2010.

"We have the Olympics to aim for, to try and develop players and increase the pool of players at a younger age. You can't buy experience.

"All you can do is try and bridge that gap and bring something new up your sleeve for the very experienced New Zealand side. We have to try and work hard and on the day it is all up to the boys.

"By Glasgow, we should have a very strong pool of players to pick a squad from because everyone would have had a chance to play in the IRB.

"I have never been to Scotland and I am looking forward to the IRB Scotland leg (in early May) to get the feel, to understand what the weather is like. It will probably be wet, I am assuming."

Readers in Scotland may share Punivalu's pessimistic view of the weather, but if Samoa can cope with the unpredictable nature of Scotland's climate, the team of "brothers" will certainly be ones to watch.